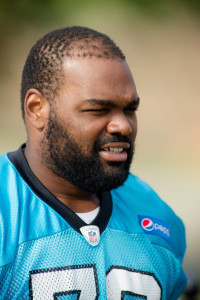 [RELATED: A Look Back At The Patriots-49ers Jimmy Garoppolo Trade]

In July of that year, the Panthers released Oher with a failed physical designation, which allowed him to collect injury compensation. Oher’s contract was over before it even began, and his NFL career was finished after just eight seasons in the NFL. Oher overcame adversity throughout his life to become a first-round pick and found his second wind with the Panthers after some rocky years with the Ravens and Titans. The Panthers reached Super Bowl 50 with Oher as Cam Newton‘s protector and they hoped to keep him in that spot through at least 2019. Instead, Oher would see his last NFL down at the age of 30 and leave the game after starting in all 110 of his games.

2 comments on “This Date In Transactions History: Panthers Shut Down Michael Oher”