The Packers have activated defensive back Ibraheim Campbell from the physically unable to perform list, the club announced. 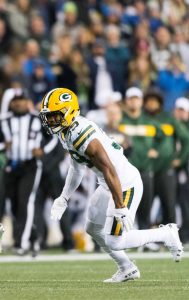 Campbell originally joined Green Bay’s roster last November when the Packers claimed him off waivers shortly after trading fellow safety Ha Ha Clinton-Dix to the Redskins. Unfortunately, Campbell’s season ended roughly a month later when he suffered a torn ACL. Green Bay re-signed him in August 2019, but he spent the first nine weeks of the year on PUP while recovering from his knee injury.

Now 27 years old, Campbell entered the NFL as a fourth-round pick of the Browns in 2015. A part-time starter during his time in Cleveland, Campbell has since bounced around the league, seeing action with the Texans, Cowboys, and Jets over the past two-plus seasons.

The Packers already have three capable safeties in Adrian Amos, Darnell Savage, and Will Redmond, meaning Campbell will likely see most of his time on special teams. He’s played at least 40% of his club’s special teams snaps in six of his seven NFL seasons.