The Raiders have some money burning a hole in their pocket. Sort of. As it stands now, the Raiders will have to spend a certain amount of money to exceed the collective bargaining agreement’s cash-spending floor, Albert Breer of The MMQB writes. 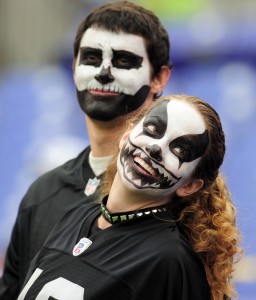 The most recent CBA stipulates that teams must spend a certain amount on payroll over two four-year periods: 2013-16 and 2017-20. In each set, teams are mandated to utilize 89% of the salary cap. The books are set to close on the first period and the Raiders stand as the only team shy of the minimum, a union source says.

Don’t expect the Raiders to go on a spending spree, however. They’re close to where they need to be and they could get there without the help of new contracts. Some players already on the roster have incentives that can be reached in the next month or so and that would help Oakland to crack the threshold. If the Raiders are still short, they may make a move or two to meet the requirement.

The CBA also stipulates that the league-wide spend is higher than 95% of the cap over each period, but that requirement has already been met. Each team has spent more than $500MM on players in the last four years which comes out to roughly $17 billion in cash for players.

4 comments on “Raiders Must Spend To Reach Salary Minimum”