Clearly he didn’t leave much wiggle room. It’s not like Fitzpatrick lit the world on fire against New York, but he did have two touchdowns and no turnovers. The offense has undeniably moved better with Fitzpatrick under center than Tagovailoa, but obviously Tua is the future. Flores felt comfortable benching Tagovailoa during their Week 11 loss to the Broncos, but clearly doesn’t want to make a full-on change. That being said with Tagovailoa potentially looking at a multi-week absence due to his thumb injury, Fitzmagic might not be ending too soon. If Fitzpatrick plays the Dolphins into the playoffs, it’ll be very interesting to see whether Flores can avoid changing his tune. 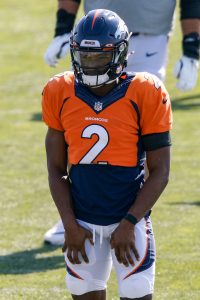 Garett Bolles‘ contract-year emergence will transform him from a scrutinized player to the Broncos’ long-term left tackle. The Broncos announced Saturday they agreed to terms on a new deal for their breakout blocker. 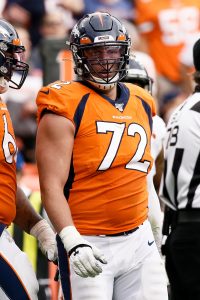 It’s a four-year, $68MM deal for Bolles, Ian Rapoport of NFL.com tweets. This news comes days after Bolles indicated he wanted to stay in Denver beyond his rookie contract, though no known negotiations had transpired.

Bolles is not the NFL’s highest-paid tackle, at $17MM per year, but he now becomes its sixth-best-compensated tackle. This represents one of the most stunning contract-year developments in recent NFL history.

The 2017 first-round pick led the NFL in holding penalties by a wide margin from 2017-19 and entered this year’s training camp in a battle to keep his job. The Broncos did not pick up Bolles’ fifth-year option in May, but after 10 strong games as one of the best left tackles in the game this season, the franchise has changed its line of thinking.

Going into Week 12, Bolles grades as Pro Football Focus’ No. 1 overall tackle. He has not allowed a sack this season, despite the Broncos having used three starting quarterbacks. The 28-year-old blocker has become Denver’s first long-term tackle starter since Ryan Clady and followed the former All-Pro in signing a Broncos extension. Denver has used a different right tackle starter in Week 1 of every season since 2013, but Bolles — his struggles from 2017-19 notwithstanding — has started every game since he arrived out of Utah three years ago. The Broncos already have right tackle Ja’Wuan James — a 2020 opt-out after missing most of last season — signed to a big-ticket deal.

This deal doubles as the Broncos’ first major extension for a draftee selected since Super Bowl 50. Denver kept 2016 third-rounder Justin Simmons around via franchise tag but had not previously come to a notable extension agreement with a player chosen since its February 2016 victory parade.

It took much longer than expected, but Mark Barron is in position to make his Broncos debut. The team activated him from IR Wednesday.

The Broncos signed the former first-round pick during training camp, eyeing a potential part-time role for the veteran on a suddenly reshaped linebacking corps. Denver released longtime starter Todd Davis before the season and saw rookie Justin Strnad suffer a season-ending injury during camp. Barron, however, soon experienced injury troubles. But the former Buccaneers, Rams and Steelers starter is on track to play in Week 12.

Pittsburgh released Barron earlier this year, and he spent nearly six months in free agency. Upon signing a one-year, $2.5MM deal with the Broncos, Barron suffered a hamstring injury. During his rehab process, Barron then encountered a pectoral malady.

The former Bucs safety and longtime Rams linebacker will likely see time mixing in on a Broncos defense that has used 2019 backup Josey Jewell as a full-time player alongside top inside ‘backer Alexander Johnson. Jewell’s snap rate has risen from 20% last season to 93% this year. But with Pro Football Focus slotting Johnson and Jewell as 2020’s No. 10- and No. 26-ranked off-ball linebackers, respectively, Barron may not see as much time as initially planned.

To make room for Barron, the Broncos waived running back LeVante Bellamy. The latter has bounced on and off Denver’s active roster this season.

A few months ago, any talk of the Broncos giving an extension to LT Garett Bolles would have seemed ridiculous. After all, Denver declined Bolles’ fifth-year option back in May, and the former first-round pick had not even come close to living up to his draft status.

But Bolles has been outstanding in 2020, ranking as Pro Football Focus’ top-rated tackle and receiving excellent marks for both his run-blocking and pass-blocking acumen. Plus, he has been called for just three holding penalties thus far, only one of which has been accepted. In his first two years as a pro, he was tied for the league lead in most accepted holding penalties, and in 2019, he was tied for sixth.

As Mike Klis of 9News.com writes, Bolles credits increased attention to his technique as one of the primary reasons for his stark improvement, along with new OC Pat Shurmur‘s pulling scheme. “I think in the past I just used my athletic ability to get the technical side of things,” Bolles said. “To the little things where taking sets barefoot in your kitchen, to watching film, watching guys, looking on the outside shoulder, hand movement and hand fights, and things like that.”

Better fundamentals have allowed the 28-year-old’s natural athleticism — which is what attracted the attention of GM John Elway to begin with — to shine through. And as he is earning just under $2MM this year, he looks like one of the best bargains in the league.

So one would think that Denver would be acting quickly to lock him up on a long-term basis, especially since the left tackle market is red-hot at the moment. But according to Klis, the club has yet to open extension talks, though that’s almost certainly due to the financial uncertainty created by COVID-19 and the fact that the salary cap is likely to decrease in 2021.

There is no indication that the Broncos are opposed to a new deal, and Bolles would certainly be receptive to one. “I mean, (a contract extension) would be nice, but it’s not up to me,” he said (via Troy Renck of Denver 7 ABC). “That’s why I hired an agent, he talks to Mr. Elway. When they want to do it, they’ll do it. That’s just how I look at it. I just want to be consistent. I have to go out there and play at a high level every single week.”

Given his past track record and the likelihood of a depressed free agent market, it would be surprising to see Bolles match or top David Bakhtiari‘s new $23MM/year deal with the Packers, and he may not hit the $20MM AAV threshold. But a surefire Pro Bowl (and perhaps First Team All-Pro) left tackle coming off a dominant season will be a highly-desirable commodity, so whether it comes from the Broncos or someone else, Bolles will be in line for a pretty sizable raise in short order.