2:14pm: The Bears have officially placed the franchise tag on Jeffery, the team announced today (via Twitter).

MONDAY, 2:06pm: The Bears remain on track to use the franchise tag on Jeffery, after multiple discussions in Indianapolis with agent Tory Dandy failed to result in a long-term deal, tweets Rapoport. Mike Garafolo of FOX Sports confirms (via Twitter) that the Bears have let Jeffery’s camp know they’ll tag the wideout, while ESPN’s Josina Anderson tweets that it’ll be the non-exclusive franchise tag, worth $14.599MM.

FRIDAY, 1:48pm: While the franchise tag appears likely for Jeffery, his agent will meet with the Bears again in Indianapolis to discuss a longer-term deal, tweets Ian Rapoport of NFL.com.

1:28pm: The Bears will use their franchise tag on wide receiver Alshon Jeffery, reports Adam Schefter of ESPN.com (via Twitter). The move, which isn’t yet official, doesn’t come as a surprise, since a report earlier this week suggested Chicago expected to retain the free agent wideout. 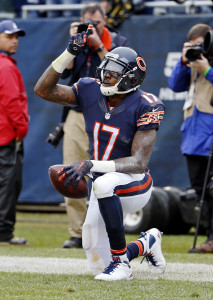 Speaking to reporters this week at the combine in Indianapolis, general manager Ryan Pace indicated that the team was “aggressively” negotiating with the receiver now in an effort to lock him up to a new deal. Pace, who said he gets the sense that Jeffery wants to remain in Chicago, said at the time that using the franchise tag was on the table as a potential outcome, and with Tuesday’s deadline looming, it seems the situation is headed in that direction.

After averaging 87 receptions and 1,277 yards in 2013 and 2014, Jeffery was plagued by injuries in 2015, but he was excellent when healthy, averaging a career-high 89.7 yards per game. If and when he is franchised by the Bears, he’ll be in line for a salary north of $14MM for 2016. He could still work out a longer-term agreement with the team by July 15th, or play the season on the one-year tag.

In other franchise tag news, the Ravens have already used theirs on kicker Justin Tucker, while Washington is said to be deciding between the franchise or transition tag for quarterback Kirk Cousins.

8 comments on “Bears Use Franchise Tag On Alshon Jeffery”