USC fired head coach Clay Helton after two games, ending his six-plus-year tenure. The Trojans may look to a high-profile NFL coordinator to fill the vacancy.

NFL sources believe Eric Bieniemy will be a candidate for the job, Adam Schefter of ESPN.com tweets, adding that this particular position is one of the only college gigs for which the Chiefs offensive coordinator will consider leaving the NFL.

Bieniemy has been with the Chiefs since Andy Reid’s 2013 Kansas City arrival, but he coached at the college level prior to moving to Missouri. The fourth-year Chiefs OC also went to high school in the Los Angeles area.

An interesting subplot has factored into Bieniemy’s accomplished OC run. Thought to be a slam-dunk hire in both the 2020 and ’21 offseasons, the 52-year-old assistant has failed to land a head coaching job. Taking over as Kansas City’s OC from Matt Nagy, who followed Doug Pederson in being hired for an HC post, Bieniemy has been in this role throughout Patrick Mahomes‘ dominant run as the Chiefs’ starting quarterback.

While it would make sense for Bieniemy to stay in arguably the NFL’s top coordinator situation and continue to pursue a top job at the sport’s highest level, USC is certainly a high-end college gig. Bieniemy is not the Chiefs’ primary play-caller, which has affected his perception at the NFL level, but working with Reid and Mahomes essentially ensures he will have a vital role on a top-tier NFL offense. It would seemingly take a monster offer to convince the veteran coordinator to leave these friendly confines.

Jason La Canfora of CBS Sports, citing sources close to Bieniemy, reports that Bieniemy would indeed be interested in the USC opening. Of course, if the school wants to find its next coach by Thanksgiving for recruiting reasons, Bieiemy would presumably not be a realistic target. And, as could be expected, Bieniemy has downplayed his connection to the job.

“[I]f USC reached out to me right now, my answer would be I am preparing for this team to play against the Baltimore Ravens,” Bieniemy said (via Myles Simmons of Pro Football Talk). “And that’s how I roll, you guys know that. I am where my feet are, OK? My job is to make sure we’re ready to play a complete, sound, 60-minute football game where we can come out and win the game.”

Bieniemy is a Colorado alum but has experience coaching in Los Angeles, having been UCLA’s running backs coach in the 2000s. His top college role to date was as his alma mater’s offensive coordinator from 2011-12. A sign Bieniemy will be tough to pry from Kansas City: he withdrew his name from consideration for the Colorado HC job last year. 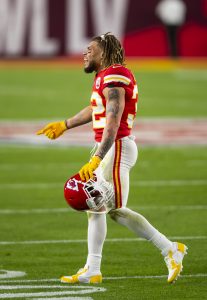 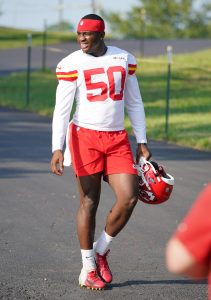