For the second time this season, Anthony Averett is on injured reserve. The Raiders moved the free agent acquisition to IR on Tuesday; a toe injury will send the fifth-year cornerback there this time. 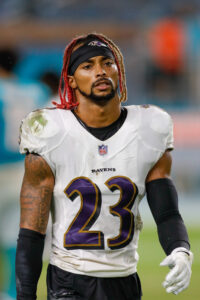 Averett missed a chunk of the season due to a broken thumb sustained in Week 1. The Raiders used one of their injury activations to bring Averett back to their active roster in October. Turf toe will shut Averett down for at least another four games, Jeremy Fowler of ESPN.com tweets.

This offseason’s IR rule change would allow for the team to activate Averett again, but he must miss at least four games, shelving him until Week 17. Activating Averett a second time would count toward the Raiders’ eight injury activations. The timeline here could well lead to an Averett shutdown.

The Raiders added Averett on a one-year, $4MM deal and have turned to him as a starter. Trading Trayvon Mullen to the Cardinals on cutdown day, the Raiders installed Averett as a starter opposite March trade get Rock Ya-Sin. Averett has worked as a starter in six of the seven games he has played with Las Vegas. Pro Football Focus has not been particularly impressed with the ex-Raven, slotting him just inside the top 100 among corners this season.

Las Vegas has not been able to deploy its top three corners together for much of the year. Second-year cover man Nate Hobbs has been on IR for several weeks, though he is on the way back after being designated for return last week. A broken hand sent Hobbs to IR. This has affected the Raiders’ defensive capabilities. Patrick Graham‘s unit ranks 26th in points allowed and 27th in total defense.

To replace Averett on their active roster, the Raiders signed cornerback Tyler Hall from the practice squad. In his first season with the Raiders, Hall has played in two games, doing so in each of the past two weeks as a gameday elevation.