Before he ended up joining the Bears, wideout Marquise Goodwin received some interest from one of his former team’s top rivals. ESPN’s Jeremy Fowler reports (via Twitter) that the Seahawks were interested in adding the veteran receiver.

Following a four-year stint with the Bills to start his career, Goodwin put his name on the map once he joined the 49ers. He had a breakout season in 2017, hauling in 56 receptions for 962 yards and two touchdowns. The receiver’s production dropped off in 2018 and 2019, and after getting traded to the Eagles last offseason, Goodwin opted out of the 2020 season due to COVID concerns.

The Seahawks are plenty familiar with the 30-year-old; Goodwin has played in five career games against the Niners’ division rival, hauling in 12 catches for 154 yards. Had Goodwin joined Seattle, he would have had to battle for reps behind starters D.K. Metcalf and Tyler Lockett, although Fowler notes that the Seahawks are content rolling with Freddie Swain as that “complementary piece.” The 2020 sixth-rounder hauled in a pair of touchdowns during his rookie campaign.

Instead of joining Seattle, Goodwin ultimately joined the Bears. We learned yesterday that the veteran inked a one-year deal with Chicago.

The Seahawks have signed rookie wide receiver Freddie Swain according to Field Yates of ESPN.com (on Twitter). In accordance with his sixth-round draft slot, Swain is set to earn $3.424MM over the course of his four-year deal. 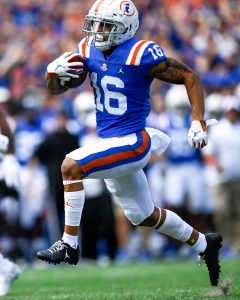 The Seahawks nabbed Swain with the No. 214 overall pick, adding to the team’s already tight competition at wide receiver. It’s a group headlined by Tyler Lockett, D.K. Metcalf, and Phillip Dorsett with two or maybe three spots up for grabs on the 53-man roster. Swain will battle with David Moore, John Ursua – a 2019 pick who topped 1,343 yards in his final year at Hawaii, and a number of UDFAs for a place on the depth chart.

Swain, a Florida product, first made a name for himself as a return specialist. Last year, he showed off his pass-catching abilities, notching 38 catches for 527 yards and a Gators-high seven touchdowns.

With Swain signed, the Seahawks are left with six unsigned rookies from their 2020 draft class. Here’s the full rundown, via PFR’s tracker: