After three-plus years, the Bills are ending their run with Cody Ford. Buffalo is trading the former second-round pick to Arizona, Adam Schefter of ESPN.com tweets. 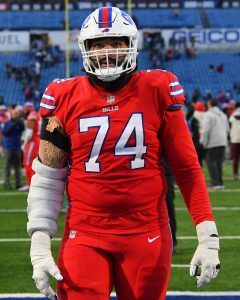 The Cardinals are sending a fifth-round pick for the Bills offensive lineman. Ford has played tackle and guard as a pro, having been stationed at the latter spot more recently. The Bills have announced the trade. Monday’s transaction will reunite Ford with Kyler Murray and fellow 2019 Oklahoma draftee Marquise Brown.

This move comes not long after a report indicated Ford was on Buffalo’s roster bubble. The former No. 38 overall pick, who enticed the Bills to move up two spots for him three years ago, had struggled to hold a spot in the Bills’ starting lineup. After starting for almost all of his 2019 rookie season, Ford saw his second campaign end early. But the ex-Sooner still started all seven games he played. In 2021, the Bills used Ford as a part-timer. His inability to play tackle as a swing backup affected this deal, per The Athletic’s Joe Buscaglia (on Twitter).

This does add a younger blocker to an aging Cardinals offensive line. The team saw two of its interior O-line starters — guard Justin Pugh and center Rodney Hudson — consider retirement this offseason. Pugh is 32, while Hudson and right tackle Kelvin Beachum are 33. While Ford is far from a proven commodity, he is going into his age-26 season. It also marks the second straight offseason in which the Cards have traded a pick for a starter-level O-lineman; they sent the Raiders a third-rounder for Hudson and a seventh last year.

Pro Football Focus has never been impressed by Ford, rating him outside the top 60 at his position in each of his three seasons. Last season, PFF slotted Ford as the fourth-worst guard (among regulars) — a mark that came in one spot behind Cardinals starter Josh Jones. The team used a third-round pick on Jones in 2020 but added four-year Giants starter Will Hernandez — a 2018 second-round pick — this offseason.

Hernandez entered Monday viewed as the team’s right guard starter opposite Pugh, but the team is in need of reinforcements up front. Injuries have sidelined Justin Murray, Danny Isidora and rookie Marquis Hayes. Murray, a Cards regular starter during the 2019 and ’20 seasons, has not returned to regular work after missing most of last season due to injury.

To make room on their 85-man roster, the Cardinals released veteran wide receiver Marcell Ateman. The former Raiders backup signed with the Cards earlier this month.