The Bills will be without a key piece for tonight’s game against the Patriots. Buffalo has placed A.J. Klein on the reserve/COVID-19 list, reports ESPN’s Field Yates (on Twitter). 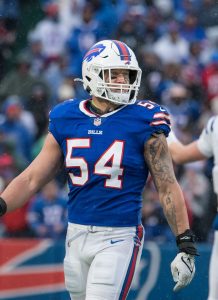 Klein signed a three-year pact with the Bills back in 2020, and he started 11 of his 16 games during his first season in Buffalo, finishing with career-highs in tackles (75), sacks (five), and QB hits (nine). He also started one of his three playoff appearances. The 30-year-old has only started three of his 11 games this season, collecting 30 tackles.

The linebacker has been completed phased out of the defense in six appearances this year, but he’s seen significant roles in his other five appearances. As Joe Buscaglia of The Athletic tweets, tonight could have been one of those games where Klein saw time on defense, as the Bills could have relied on a three-linebacker look against the Patriots’ “fullback heavy approach.”

The Bills also promoted two players from the practice squad for tonight’s game (via Aaron Wilson on Twitter): nose tackle Eli Ankou and linebacker Joe Giles-Harris. Ankou has seen time in 29 career games, including an appearance with Buffalo in Week 12. Giles-Harris got into 14 games with the Jaguars between 2019 and 2020, and he’s spent the majority of the 2021 campaign on Buffalo’s practice squad.