The Falcons have formally signed second-round pick Richie Grant. The safety out of UCF will earn $8.3MM on his four-year deal, including a $3.4MM signing bonus. 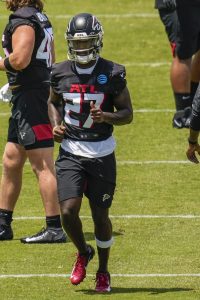 Atlanta inked both of its fourth-round picks on Thursday, taking care of business with center Drew Dalman and defensive back Darren Hall. Now, with Grant taken care of, first-round tight end Kyle Pitts stands as the last straggler. That shouldn’t be much of an issue for the Falcons, though the two sides may be haggling over some particulars like offset language.

The Falcons moved down from No. 35 overall to No. 40, scoring Grant and adding a fourth-round choice in the process. Grant notched 290 tackles, one sack, 17 passes defensed, ten interceptions, and five forced fumbles while on campus. At the pro level, he’ll be a part of the Falcons’ secondary reboot, with Keanu Neal, Damontae Kazee, and Ricardo Allen out of the picture.

If he’s able to pick up the playbook quickly, Grant could be the first safety off of the bench behind new starters Duron Harmon and Erik Harris.