The Giants are activating defensive end R.J. McIntosh from the non-football injury list, a source tells Ian Rapoport of NFL.com (on Twitter). The Giants will have to drop someone from the roster to welcome McIntosh back, but he’ll provide front seven help for a team that can certainly use some. 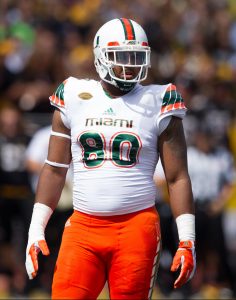 When McIntosh was placed on the NFI list in early September, the Giants had playoff aspirations. But, in November, the Giants aren’t playing for much. The G-Men are 1-7 after losing to the rival Redskins in Week 8 and even running the table would not guarantee them a place in the postseason.

McIntosh, a Miami product, was a fifth-round pick of the Giants in the spring, but was unable to partake in practice for much of the offseason. The exact nature of his medical issue is unclear, but it is believed that it is related to an thyroid problem. Whatever the issue was, it appears to be under control.

As a junior at Miami, McIntosh tallied 52 total tackles, including 12.5 tackles for a loss and 2.5 sacks. He’s unlikely to see significant playing time right away, but he’ll have an opportunity to play his way onto the 2019 team in the second half of this season.