Titans OL Nate Davis Could Get $11MM+ On Next Contract

The Titans’ offensive line has received its fair share of credit for the team’s dynamic running game over the past few years. One of the more unheralded members of that line, offensive guard Nate Davis, could be eyeing a significant contract once his rookie pact expires. As Adam H. Beasley of ProFootballNetwork.com writes, Davis is quickly transforming into one of the NFL’s top offensive guards, and “industry insiders believe he will get paid like it with another stellar year.” 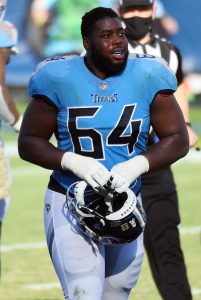 The 2019 third-round pick out of Charlotte has spent his entire two-year career with Tennessee. After starting 12 of his 13 games as a rookie (plus another three starts in the postseason), Davis started all 16 games for the Titans in 2020, playing in each of the team’s 1,074 offensive snaps. Pro Football Focus graded the 24-year-old as one of the better offensive guards in the NFL, and another strong performance in 2021 should allow him to cash in on a potential extension.

As Beasley notes, Davis has had the opportunity to learn from a number of veterans during his short stint in Tennessee, including Taylor Lewan, Rodger Saffold, and Ben Jones. Couple that guidance with Davis’s intangibles (including a top-notch work ethic), and it shouldn’t be a surprise that the lineman has continued to improve in each of his two NFL seasons, and it wouldn’t be a surprise if he takes another leap in year three.

So how much could Davis ask for on his next contract? Per Beasley, league insiders believe the player can command a deal that pays him as one of the top offensive guards in the NFL, with the writer citing Brandon Brooks ($14.1MM AAV), Zack Martin ($14MM AAV), Andrus Peat ($11.5MM AAV), and Saffold ($11MM AAV). The Titans are going to be in a bit of a cap bind going forward, so the organization may have to get creative if they want to retain Davis beyond the 2022 season.

The Titans have have signed third-round guard Nate Davis to his rookie contract, the club announced today. 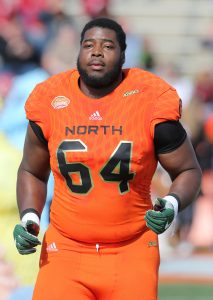 A Charlotte product, Davis made 37 starts over three seasons while playing both tackle and guard. Per the Pro Football Focus draft guide, Davis allowed only seven sacks during his collegiate career. In 2018, he gave up just four pressures on 237 pass-blocking snaps.

Tennessee will field an all-new guard tandem in 2019 after cutting Josh Kline and allowing Quinton Spain to leave via free agency. Free agent addition Rodger Saffold will take over at left guard, but right guard is wide open. Davis, the 82nd overall selection, will compete with veterans like Kevin Pamphile and Austin Pasztor for a starting role.

With Davis under contract, Tennessee has only one 2019 draft choice — second-round wideout A.J. Brown — left unsigned.