Despite Teven Jenkins undergoing back surgery in August, it appears the Bears will see their second-round pick on the field this season. The rookie tackle is back on Chicago’s 53-man roster.

The Bears activated Jenkins from IR on Saturday, a move Matt Nagy indicated was on tap ahead of Week 13. While it is not certain if Jenkins will move into the starting lineup soon, his seeing any time this year can be viewed as progress. The Oklahoma State product faced the prospect of missing his rookie season.

Chicago parted ways with longtime tackle starters Charles Leno and Bobby Massie this offseason and moved to sign Jason Peters after Jenkins’ injury. Peters’ extensive injury history notwithstanding, the 39-year-old veteran has started every game for the Bears this season. Jenkins received reps at both the left and right tackle spots during training camp, so it will be interesting to see how the Bears deploy him to start his career.

Jenkins was the fifth tackle off the board in this year’s draft. He started 35 games at Oklahoma State, helping Chuba Hubbard earn Big 12 Offensive Player of the Year acclaim in 2019 and earning first-team all-conference recognition last year. With the Bears having an 18th-year veteran at left tackle and having not invested much on the right side, Jenkins will be given every opportunity to be a long-term starter up front.

The Bears have designated Teven Jenkins to return from injured reserve, head coach Matt Nagy announced. The Bears will now have a 21-day window to activate the rookie offensive tackle. 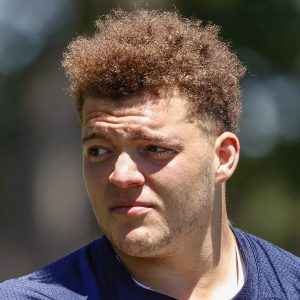 “It’s been a while since Teven’s put the pads on, so we’ll start there,” Nagy said (via NBCSports.com). “That will be exciting for us to see where he’s at. I know he’s really anxious and excited to get out there. As far as the sides and stuff, we’ll work through it with him. It’s just gonna be honestly, really, an hour-by-hour, day-by-day process with him. But it’s definitely a good thing to have, and we’re excited to get him out there.”

Jenkins, the No. 39 overall pick in this year’s draft, hasn’t put the pads on since undergoing back surgery in August. Before that, the Bears planned to use him as their No. 3 tackle. On the plus side, they were able to add Jason Peters that same week. Once Jenkins is able to return, he’ll slot somewhere behind the ex-Eagles star and Elijah Wilkinson. The Bears also have Lachavious Simmons and fifth-round rookie Larry Borom on hand.

The Bears packed the No. 52 choice and a third-round pick to move up for Jenkins, so they clearly have high hopes for him. Now, the Oklahoma State product could be days away from making his debut.

Teven Jenkins‘ rookie season might have to wait. The second-round left tackle will undergo back surgery later today, according to Bears head coach Matt Nagy.

The “hope is to have Jenkins back this season,” Nagy says, but it doesn’t sound especially promising. Jenkins, the No. 39 overall pick in this year’s draft, was slated to support starters Jason Peters and Lachavious Simmons. Now, he’ll likely have to focus on rehab with an eye on 2022.

The Bears have high hopes for Jenkins. After selecting quarterback Justin Fields in the first round, they packaged No. 52 and a third-round pick to nab the Oklahoma State standout early in the second. And, just a couple of days after drafting Jenkins, the Bears released long-time tackle Charles Leno.

With Jenkins sidelined, the Bears may look to beef up their offensive line in the coming weeks. If they look to the free agent market, the Bears could consider the likes of Mitchell Schwartz, Russell Okung, and Demar Dotson.

As Rapsheet points out, that will wrap up the team’s draft class with all seven rookies being signed. The Bears drafted Jenkins 39th overall out of Oklahoma State. Chicago gave up a third-round pick to trade up with the Panthers from No. 52 and nab Jenkins.

Just a couple of days after drafting Jenkins the team released long-time tackle Charles Leno. They reportedly plan on plugging in Jenkins as a starter right away at left tackle. He’ll be tasked with protecting the blindside of Fields and/or Andy Dalton as a rookie.

Jenkins was a three-year starter at Oklahoma State and broke out this past season, earning first-team All-Big 12 honors. Germain Ifedi will start opposite him at right tackle.