Wyatt Teller got himself paid. The Browns signed their starting guard to a four-year extension, reports NFL Network’s Mike Garafolo (via Twitter). 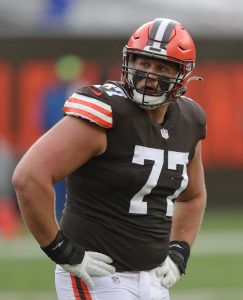 The four-year pact will keep Teller in Cleveland through the 2025 season. The deal is worth $56.8MM ($29MM guaranteed), making him one of the highest-paid offensive guards in the NFL (via NFL Network’s Tom Pelissero on Twitter). Teller was originally set to hit free agency following this season.

Teller was a fifth-round pick by the Bills in 2018, but he was traded to the Browns after only one season in Buffalo. Since joining Cleveland, the offensive lineman has started 29 of his 35 appearances. That includes nine starts this season, with Teller appeared in 100 percent of his team’s offensive snaps. Pro Football Focus has been especially fond of his recent performance, grading him as one of the best guards (especially with run blocking) in the NFL (per Garafolo on Twitter).

GM Andrew Berry has been busy investing money and assets into his offensive line since he took on the role. He gave Jack Conklin a $42MM deal, and he selected Jedrick Wills Jr. with the 10th-overall pick in the 2020 draft. Now, Berry can rest easy knowing that he has another foundational piece under contract for the foreseeable future.