The Steelers continue to deal with injuries, and we can now add Ben Roethlisberger to the list of the walking wounded. Mike Tomlin revealed today that his starting quarterback is dealing with a left pectoral injury.

The head coach wasn’t sure when Roethlisberger specifically suffered the injury during the Steelers Week 2 loss to the Raiders. Per ESPN’s Brooke Pryor, the 39-year-old was hit 10 times (including a pair of sacks), and Tomlin made it clear that the team had to do a better job of protecting their quarterback.

“He took too many hits.,” Tomlin said (via Pryor). “We can run the ball better. We can get the ball out of his hand quicker. We can stay on schedule and not get behind the sticks and get in situations where the line of the game is so far that that that enhances the rush.”

Through his first two games of the season, Roethlisberger has completed 62.5 percent of his passes for 483 yards, two touchdowns, and one interception. If he was forced to miss time, the team could turn to Mason Rudolph or Dwayne Haskins.

Roethlisberger isn’t the only Steelers player dealing with an injury. T.J. Watt left Sunday’s game, while wideout Diontae Johnson suffered an injury on the final play of the game. Devin Bush and Joe Haden missed Sunday’s contest with groin injuries.

The Steelers have signed Taco Charlton to their 16-man practice squad, per an official club announcement. The defensive end will look to impress on the practice field and see his first live action of the 2021 season.

Charlton, once a highly-touted first-round pick of the Cowboys, flamed out quickly in Dallas. After just two-plus years with the Cowboys, he moved on to the Dolphins and did his best work in 2019 — five sacks in ten games. He had a decent 2020 with the Chiefs too, up until he broke his leg in November. He finished out with two sacks, four quarterback hits, and a forced fumble for KC. However, the 26-year-old (27 in November) wasn’t able to make the cut.

His first opportunity could come quicker than expected since T.J. Watt is dealing with a groin injury. Fortunately for the Steelers, the latest word is that Watt should be able to play on Sunday against the Bengals.

The Steelers have placed defensive lineman Tyson Alualu on injured reserve, per a club announcement. There’s no word on his timetable just yet, but the veteran will be out for a minimum of three weeks. 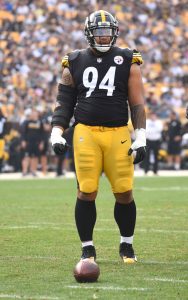 Alualu was forced out early on Sunday and fitted for a cast later that day. The Steelers went on to lose to the Raiders, 26-17. They’re now at the .500 mark heading into Week 3 when they’ll face the rival Bengals.

It’s a rough break for the Steelers’ D-Line since Alualu is their starting nose tackle. As you may recall, the 34-year-old was moments away from leaving the Steelers for Urban Meyer and the Jaguars in the spring. Instead, he had a change of heart and re-upped in Pittsburgh.

Alualu was the 10th overall pick of the Jags way back in 2010. He’s never lived up to his draft status, but he’s still been a solid player up front. That includes some quality work last year when he played on ~44% of the team’s defensive snaps and finished with 38 tackles, two sacks, and five passes defended. He received very strong marks from Pro Football Focus for his work as a run defender.

For now, the Steelers will turn to Isaiah Buggs and Carlos Davis for help. And, to further fill in, they’ve promoted defensive lineman Henry Mondeaux from the practice squad.

The Steelers were willing to move past their stubborn financial policy, but it’s still uncertain if Watt is an exception or a changing of philosophy. As Florio notes, today’s move could simply be an “aberration” instead of a “trend.”

Interestingly, Watt may have actually left money on the table. As Adam Schefter of ESPN.com reports, Watt’s agents believed they could squeeze the Steelers for more cash, but Watt simply went into the office of Steelers president Art Rooney to tell him that the deal was done (Twitter link). He then excused himself to go work out.

The NFL has a new highest-paid defensive player. Days away from Week 1, the Steelers and T.J. Watt ended their impasse. Watt agreed to terms on a four-year deal worth more than $112MM, Ian Rapoport of NFL.com tweets. 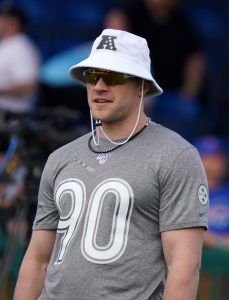 Watt will receive $80MM fully guaranteed on a contract that averages more than $28MM annually, Rapoport adds, taking the younger Watt superstar past Joey Bosa among defenders. This certainly looks like a big win for the All-Pro Steelers edge rusher, after he and the Steelers haggled over guarantees at the 11th hour.

Watt’s fully guaranteed figure also tops Bosa’s $78MM on a deal that saw the Steelers break their precedent of not including guaranteed money beyond the first year of extensions. This will bring the two-time All-Pro defender back into the fold ahead of his fifth season. Watt’s pact also surpasses Ben Roethlisberger‘s for guaranteed money in Steelers history; Big Ben’s 2015 extension included $60.75MM guaranteed at signing. Roethlisberger spent this week lobbying for the team to get a Watt deal done, whatever the cost.

The accomplished outside linebacker resumed practicing in full this week, after he went to the increasingly popular hold-in measure during training camp. While Watt only partially went through with a hold-in, participating in non-team portions during preseason workouts, the Steelers have put this matter to rest by rewarding a homegrown talent.

This will be Watt’s age-27 season. Thursday’s agreement prevents a 2022 franchise tag and will tie him to the Steelers through the 2025 campaign. Pittsburgh prefers to finalize its extensions ahead of the regular season. The team deviating from its usual guarantee structure will surely be of interest to Minkah Fitzpatrick, who will be on track for a market-setting extension next year.

Although Watt led the NFL with 15 sacks last season, his 61 quarterback hits placed him well apart from everyone else. No other player compiled more than 45 (Bosa) in 2020. Watt’s 2017 arrival has coincided with the Steelers leading the NFL in sacks in each of the past four seasons. On a Pittsburgh team that lost a few key starters — including longtime outside linebacker starter Bud Dupree — in free agency, Watt will be counted on to reprise his dominant form.

T.J. Watt still doesn’t have a new contract, but Steelers coach Mike Tomlin expects that his star linebacker will get his desired deal and will be at practice tomorrow.

“I remain optimistic that something is going to get done from a deal perspective,” Tomlin said today (via ESPN’s Brooke Pryor). “That aside, you know, I’m expecting him to work tomorrow. I’m proceeding with the assumption that he’s going to work tomorrow. You know, that’s kind of the approach that I’m taking.”

However, NFL.com’s Ian Rapoport isn’t as confident (Twitter link). Watt’s status for tomorrow’s practice is “up in the air,” something that’s especially relevant considering the Steelers’ “practice-to-play” philosophy. Rapoport notes that the Steelers and Watt’s camp had “intense contract negotiations” throughout the summer, and the Steelers are holding fast to their organizational philosophy of not engaging in contract talks after Week 1. Rapoport warns that this deal could take a “very, very long time” and “could get difficult,” meaning Watt could play out the season on the final year of his contract.

So, there’s two matters at hand: Watt’s status for Week 1 and Watt’s extension. Assuming the Steelers stick to their guns, Watt won’t see the field this weekend unless he practices. If Watt sticks to his guns, he won’t practice until he gets a new deal. The main holding point at the moment is guaranteed money, according to Gerry Dulac of the Pittsburgh Post-Gazette on Twitter. Rapoport provides additional context, citing that the Steelers’ refusal to give anyone full guarantees after the first year of an extension. Watt is presumably pushing for more guaranteed cash.

Watt is currently set to hit free agency following the upcoming campaign. There’s a good chance the former first-rounder becomes the highest-paid defensive player in league history, which would mean an AAV of over $27MM with roughly $80MM in full guarantees. Watt’s performance to date justifies that type of expenditure. Stout against the run and pass, the 26-year-old (27 in October) graded out as Pro Football Focus’ third-best edge player last season out of 108 qualifiers. He is a three-time Pro Bowler and two-time First Team All-Pro, and he has averaged about 14 sacks a year since his sophomore campaign.

On this date in 2017, Le’Veon Bell‘s first holdout officially came to an end. On September 4, 2017, the star running back inked his franchise tender with the Steelers. 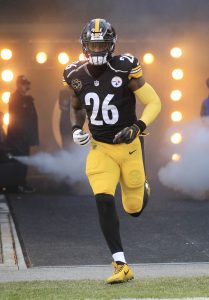 By the start of the 2017 regular season, Bell had already established himself as one of the best running backs in football. The former second-round pick had exceeded 1,000 yards from scrimmage in three of his first four seasons, and he collected 31 touchdowns through his first four campaigns. Thanks to that production, Bell wanted to be paid like one of the top running backs in the NFL, and the Steelers were certainly willing to oblige…on their terms. The team seemed to be operating on a year-by-year approach before committing big money to Bell. It was hard to blame the organization; the running back missed three games as a rookie, 10 games in 2015, and another four games in 2016. The team clearly wanted Bell to prove he could stay healthy.

Ultimately, Bell stayed home during training camp and the 2017 preseason after the two sides couldn’t reach agreement on an extension before the deadline. Bell’s decision to hold out was mostly a sign of defiance, but it didn’t sound like there was any tension between the two sides. It was reported throughout the offseason that Bell would show up for Week 1, and he did just that. That led to the September 4th transaction, when Bell inked his franchise tender. The move locked him into a one-year, $12.12MM deal.

Bell had another standout season in 2017, and he managed to appear in 15 games. He earned first-team All-Pro honors after finishing the season with 1,946 yards from scrimmage and 11 touchdowns on a league-leading 406 carries. He also had a pair of touchdowns in the Steelers’ playoff loss to the Jaguars.

Instead of inking Bell to a long-term deal, the Steelers decided to play hard ball again in 2018. The team utilized the franchise tag for a second-straight season, meaning Bell would earn $14.5MM that year. Predictably, the running back held out again, but he’d never return to the team. He didn’t report to the team prior to the deadline to ink his franchise tender, making him ineligible to play in 2018. The Steelers didn’t use the franchise tag in 2019, which finally made Bell a free agent.

The running back ended up getting a four-year, $52.5MM deal from the Jets, and he was somewhat productive during his first season in New York, finishing with 1,250 yards from scrimmage. He dealt with injuries in 2020 and hinted that he wanted a trade, leading to his outright release. He caught on with the Chiefs for the stretch run, and he finished with 353 yards from scrimmage in his nine games with Kansas City. He only saw time in one of the Chiefs’ three playoff games. The 29-year-old remains unsigned for the 2021 season.

It’s hard not to wonder how Bell’s career would currently look had he not sat out that 2018 campaign. His 2017 holdout was a precursor of things to come, and despite the fact that he signed his tag (on this date in 2017), the whole event certainly played a role in his future negotiations with the Steelers.