The Eagles are about to get some reinforcement. Tight end Tyree Jackson and safety K’Von Wallace returned to practice today, reports NFL Network’s Ian Rapoport (via Twitter). The two players now have 21 days to be activated to the 53-man roster.

Wallace was a fourth-round pick by the Eagles in 2020, and he ended up seeing time in 15 games (three starts) as a rookie. He started two of the Eagles first three games in 2021, collecting six tackles. He separated his shoulder in Week 3 and subsequently landed on injured reserve.

Jackson was a QB during his collegiate career at Buffalo, and he had a short stint with the Bills during the 2019 preseason. After spending some time in the XFL, Jackson joined the Eagles on a reserve/futures contract. Philly intends to convert the 23-year-old to tight end, and Rapoport notes that the organization has high hopes for the player. He fractured a bone in his back toward the end of the preseason, and he’s sat on IR for the entire 2021 campaign.

Now, he’ll have a chance to join a depth chart that recently lost Zach Ertz thanks to a trade with the Cardinals. The Eagles will eventually have Dallas Goedert back as the starter, but the team’s only other tight end at the moment is Jack Stoll.

Eagles guard Isaac Seumalo will undergo season-ending surgery for his Lisfranc injury, per a club announcement. Seumalo will be placed on injured reserve, leaving the Birds with a major gap on their interior line. 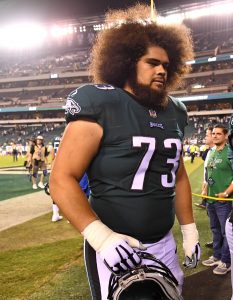 A regular starter since October 2018, Seumalo is in his second year of his contract extension. This also marks his second straight year marred by injuries. In 2020, a knee injury limited him to just nine games. This time around, he’s done after just three starts — this was the outcome doctors feared after Seumalo had to be carted off in the fourth quarter.

Of course, this comes after the Eagles also lost Brandon Brooks for the year. They’re also awaiting word on left tackle Jordan Mailata, who was unable to play in last night’s 41-21 loss to the Cowboys. For now, Nate Herbig will likely take over Seumalo’s place in the lineup.

Meanwhile, defensive back K’Von Wallace is expected to miss three-to-six weeks with a partially separated shoulder (Twitter link via NFL.com’s Tom Pelissero). While he avoided major structural damage, he’s expected to be placed on the short-term IR list.