Packers rookie running back Kylin Hill suffered a season-ending knee injury on Thursday night (Twitter link via NFL.com’s Tom Pelissero). Hill will be placed on injured reserve, opening up a spot on the 53-man roster. 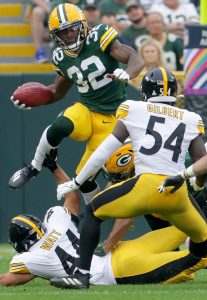 Hill suffered the injury on a third quarter kick return, when he was tackled by Cardinals running back Jonathan Ward. Both players had to be carted off of the field following the violent collision, with Ward being evaluated for a concussion.

Hill, a seventh-round rookie, has served as the Packers’ No. 3 RB behind Aaron Jones and A.J. Dillon. The bulk of his work has come on special teams, with 26 snaps on offense vs. 76 ST plays. He’ll finish his season with 10 carries for 24 yards, one reception for five yards, and ten kickoff returns for 199 yards.

The Packers could use Malik Taylor as their KR going forward, but they’ll need to add a new RB. Practice squader Patrick Taylor would be next in line, but they could also audition free agents between now and their Nov. 7 game against the Chiefs.

The Packers advanced to 7-1 after beating the league’s last undefeated team. Now the owners of the NFL’s longest active winning streak, they hold a comfortable divisional lead over the 3-3 Vikings.