The Eagles’ Andre Dillard pick did not produce the Jason Peters heir apparent the franchise hoped. Unsurprisingly, the Eagles are passing on the first-round tackle’s fifth-year option, per the Philadelphia Inquirer’s Jeff McLane (on Twitter). 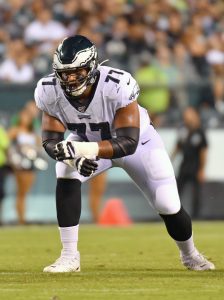 Regardless of the option tier on which Dillard landed, no scenario existed in which the 2019 No. 22 overall pick would have his 2023 salary guaranteed. All tackle tiers on the option hierarchy call for at least a $12MM salary. Dillard’s Philly path has not led to him securing such value.

Former seventh-round pick/rugby convert Jordan Mailata has become the Eagles’ long-term left tackle, and Lane Johnson remains entrenched on the right side of Philly’s O-line. Dillard, who has battled extensive injury trouble as a pro, has been a fill-in starter nine times.

The Eagles traded up three spots to select Dillard at No. 22 overall. A Washington State starter during Mike Leach‘s tenure at the Pac-12 program, Dillard suffered missed the 2020 season with a torn biceps and missed the start of the 2021 slate due to a knee sprain. Teams still inquired about a trade last year, but the Eagles held onto their top backup tackle. While the book should not be considered closed on Dillard finding a starting left tackle job as a pro, it likely will not come in Philly.

A report back in August indicated that Eagles OT Andre Dillard was generating trade interest, and as Ian Rapoport of NFL.com reports, teams are still calling Philadelphia about Dillard in advance of the November 2 deadline. With left tackle talent at a premium, other clubs in need of a boost to their offensive line are trying to pry the 2019 first-rounder from GM Howie Roseman.

Of course, the Eagles drafted Dillard with the hopes that he would become the team’s answer at LT. But after an up-and-down rookie campaign, the Washington State product missed all of 2020 with a biceps injury and has seen 2018 seventh-rounder Jordan Mailata take over as Philadelphia’s blindside blocker (while pulling down a four-year, $64MM extension in the process).

The good news is that Dillard, who started the season on the bench, filled in nicely for Mailata when the latter went down with an MCL sprain in a practice in late September. In fact, Dillard’s performance was good enough to convince the Eagles’ coaching staff to keep him at left tackle and to shift Mailata to the right side of the line when RT starter Lane Johnson was forced to miss time to attend to his mental health.

In four starts this season, Dillard has earned a strong 78.0 pass-blocking grade from Pro Football Focus, and his overall grade of 69.5 positions him as the 27th-best tackle out of 79 qualified players. He was especially stout in the Eagles’ Week 5 victory over the Panthers, though he struggled against the Bucs’ talented pass rush last week.

Despite Dillard’s mini-resurgence, the contract situations of Mailata and Johnson — who is signed through 2025 — suggest that he is probably not in Philadelphia’s long-term plans. Which means that a trade is certainly plausible, and Rapoport believes a “quality” Day 2 selection could be enough to get a deal done.

Dillard, 26, is under contract through at least 2022, and the Eagles or any acquiring team could theoretically keep him under club control through 2023 if his fifth-year option is exercised next spring.

Aiming to win the Eagles’ left tackle job after missing all of last season, Andre Dillard will be sidelined for another stretch. The third-year offensive lineman suffered a knee sprain recently and is now week-to-week, per NFL.com’s Ian Rapoport (on Twitter).

Dillard missed the 2020 season due to a biceps injury, and he did not operate as a primary starter as a rookie. While Dillard played in all 16 Eagles games in 2019, he started four in what was deemed a developmental year on team that still featured a Jason Peters–Lane Johnson tackle duo. With Peters gone, Dillard has a chance to solidify a starting job. But this development stands to benefit Mailata; the ex-rugby player could well move into the Eagles’ lineup opposite Johnson. Mailata served as Peters’ primary injury replacement last season, starting 10 games despite not playing at all from 2018-19.

It is not yet known if Dillard will miss regular-season time, but he probably will not see much action during the Eagles’ preseason slate. The Eagles do not have to decide on Dillard’s fifth-year option until May of next year, but the Washington State product has done little to justify such an investment. This season will be critical to establishing his long-term outlook in Philly.

The hits just keep on coming for the Eagles’ offensive line. Andre Dillard has been ruled out for the season with a biceps injury, as NFL.com’s Mike Garafolo tweets. Dillard, a 2019 first-round pick, was reportedly having an inconsistent camp, following his up-and-down rookie campaign. Still, it’s a bad break for an Eagles O-Line that has already been spread thin by injuries. 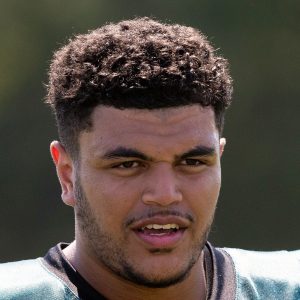 As Dillard gets set for surgery, the Eagles will scramble for solutions. They managed to quickly replace guard Brandon Brooks by re-signing Jason Peters (and shifting him to the interior), but Dillard’s absence creates a whole new problem for the Birds. Peters, in theory, could return to his usual post, but the Eagles would then have to figure out their right guard situation all over again.

If they put Peters at left tackle, the Eagles could draw from their current group of guards which includes Matt Pryor and fourth-round pick Jack Driscoll. They could also take things down to the wire by waiting a few days to see what shakes loose after cutdowns. There will undoubtedly be a number of proven guards and tackles available when teams trim down their rosters, but any new addition will have to learn the scheme in a hurry.