Wild Card weekend is in the books and 75% of the NFL’s 2021 Draft order has been set. Here’s the rundown, thus far:

The Bengals ended the 2020 campaign on a sour note, a 38-3 blowout loss to the division-rival Ravens. Despite the defeat and the team’s 4-11-1 record, there were some bright spots, most notably the performance of rookie signal-caller Joe Burrow. 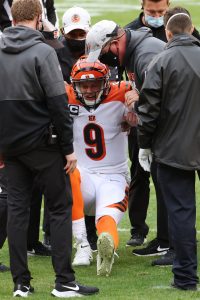 Burrow suffered a torn ACL and MCL in Cincinnati’s Week 11 loss to Washington, and he also sustained damage to his meniscus and PCL. Despite the gravity of the injury, Burrow expects to be ready for Week 1 of the 2021 season, as Ben Baby of ESPN.com details.

Speaking to the media for the first time since the injury, Burrow — who underwent surgery on December 2 — says he is past the worst part of his rehab. When asked about his prospects for the start of next season, the 24-year-old passer said, “I think I’ll be ready. I think it’ll be just fine.”

That’s obviously good news for Bengals fans, who are hoping their club can return to competitiveness in a talented AFC North. Reports from November indicated that Burrow was expected to return to action “right around” the start of the 2021 season, but given the extensiveness of the knee damage, there will continue to be concern about Burrow’s availability until he puts on the pads.

With a healthy Burrow in the fold, there is reason for optimism in the Queen City. The former LSU standout, along with RB Joe Mixon and wideouts Tee Higgins and Tyler Boyd, represent a strong core of skill-position talent, and full seasons from defensive players like D.J. Reader and Trae Waynes would also be a big help. There is still plenty of work to do along the offensive line and in the front seven, but there is at least a foundation to build upon.

There were some rumors that head coach Zac Taylor may not be given the chance to return for a third year at the helm, but team president Mike Brown quickly put an end to those rumblings earlier this week. Burrow, for one, is happy to see his HC return.

“I think Zac is going to be a great coach for a long time,” he said. “I’m happy to be in the position that I’m in and to help build this organization, but it’s going to be on Zac’s back. He’s the leader of what we’re trying to do, and he’s awesome.”

The 2020 regular season is in the books. For more than half of the NFL, that means the offseason is officially underway.

The Bengals will bring back Zac Taylor. On Monday, team president Mike Brown announced that the head coach will get a third season at the helm. 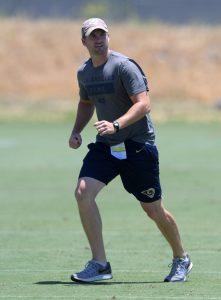 “Our fans wanted a fresh new direction two years ago, and that is what we aimed to do in hiring a bright, energetic head coach in Zac Taylor,” Brown said in a statement. “We remain bullish on the foundation Zac is building, and we look forward to next year giving our fans the winning results we all want. In Zac’s two years, we have added many new starters and contributors through the draft, we have invested heavily in free agency, and we have acquired a talented young quarterback with a bright future.”

“This season we faced challenges with injuries at key positions and missed opportunities. I am proud of our football team for fighting hard through adversity. That adversity and hard work will help us next season. We’ll enter the offseason looking to shore up our weaknesses and amplify the strengths of our talented young core. We are not discouraged, but instead feel motivated and confident that next year will reap the benefits of the work that has been done to date. We must capitalize on the opportunities in front of us. Next year we will earn our stripes.”

Taylor hasn’t had an easy two years in Cincinnati, but there was some encouraging progress in 2020. Despite closing out the year 4-11-1 with a lopsided loss to the Ravens, rookie Joe Burrow looked sharp before his season-ending injury. It’s also worth noting that they’ve been plagued by injuries across the board. On offense, they lost running back Joe Mixon and left tackle Jonah Williams. And, on the other side of the ball, defensive tackle D.J. Reader and cornerback Trae Waynes finished the year on IR.

The Bengals won’t be seeking a new head coach, but plenty of clubs will be. As of this writing, the vacancy list includes the Lions, Falcons, Texans, Jets, Jaguars, and Chargers.

The Bengals had some momentum with two straight upset victories the past two weeks, and the Ravens promptly vanquished that with a blowout win on Sunday. We had heard a few weeks ago that head coach Zac Taylor was likely to return for a third season, but that’s apparently not set in stone. 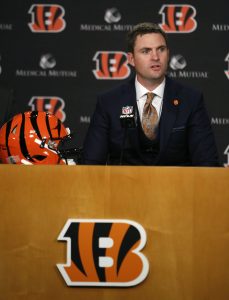 Taylor “may not be as safe as some believe,” Mike Florio of ProFootballTalk.com writes. Florio adds “there’s a rumor making that rounds that Taylor could be out.” As for what Cincy could be plotting, Florio highlights the potential reunion between Joe Burrow and his college passing guru Joe Brady, who is now the OC in Carolina. Florio think that the Bengals could be spurred to make the plunge if they fear another team will hire Brady this cycle.

Taylor is now 6-25-1 in his first two seasons as coach, and while circumstances obviously haven’t been ideal it’s still hard to defend that record. Cincinnati went after him due to his association with Sean McVay after he spent a couple years on the Rams’ staff as an assistant. The 37-year-old had never been a head coach at any level before getting hired to replace Marvin Lewis.

As Florio points out, one thing working in Taylor’s favor is Bengals brass’ usual conservative nature when it comes to firing coaches. After all, they did keep Lewis around for 16 seasons, and the fact that he’d likely have millions coming his way could be what saves Taylor for another year. If he does stick around, he’ll need a major leap from Burrow and the rest of the team to buy him a fourth season.

Of course, there’s no guarantee Burrow is ready for Week 1 next year after tearing his ACL and damaging other ligaments, so it could be a tough job for whoever is roaming the sidelines in 2021. We should know more about Taylor’s status tomorrow.

On this date in 2018, Cincinnati fans weren’t too high on Marvin Lewis. The Bengals head coach had just missed the postseason for the second-straight season, but it’s not like anyone would have had much faith in the team had they found a way to sneak into the playoffs. After all, Lewis had (and still has) his infamous 0-7 playoff record, with the head coach guiding the organization to first-round exits every year between the 2011 and 2015 campaigns.

So, with the team having only won 13 combined games between the 2016 and 2017 seasons, it only seemed natural to move on from Lewis, right? Nah. Instead, on January 2nd, 2018, the Bengals signed Lewis to a two-year extension that would last through the 2019 campaign. As an aside, Lewis had traditionally inked one-year extensions with the organization, so the two-year pact was met with plenty of ire.

A Bleacher Report article said the extension was a “commitment to mediocrity,” while Will Brinson of CBS Sports described the move as “stunning.” If you want a take on fan reactions, you can check out the comments section of our own article.

Lewis and the organization didn’t do much to calm fans’ nerves when discussing the extension. The coach acknowledged that he probably would have been fired in any other city (per USA Today), while Bengals President Mike Brown admitted that the team had recently “fallen short of our expectations.”

“My job is to win a World Championship,” Lewis said in a statement that day. “We have a talented roster full of veteran leaders and emerging young stars, and I am committed to making the necessary improvements to put this team in the best position to win.”

Critics of the extension were punching air through the five weeks of the 2018 season. With Lewis serving as the second longest-tenured head coach in the NFL (behind Bill Belichick), the Bengals held the top spot in the AFC North with a 4-1 record, and they entered their bye week at 5-3. Then the wheels fell off. The Bengals dropped five consecutive contests and finished the season with a 6-10 record. Raise your hand if you know what happened next. The Bengals and Lewis decided to mutually part ways with a year remaining on the coach’s contract.

Cincinnati bottomed out in 2019 with new head coach Zac Taylor at the helm, allowing them to snag Joe Burrow with the top pick. Lewis hasn’t really committed to returning to the NFL, but he’s still been connected to a number of openings. Over the past few years, Lewis has been linked to head coaching gigs in Washington and Dallas, and he interviewed for the lead position with the Texans in late December. The 62-year-old has been on the Arizona State coaching staff for the past two seasons.

When the extensions was signed three years ago today, Lewis and the Bengals organization probably weren’t envisioning their present-day status. Everyone else? I think we all saw this coming.