Bengals’ Trey Hendrickson Cleared To Play In Divisional Round

The Bengals have received some very positive news on the injury front. Defensive end Trey Hendrickson has been cleared from concussion protocol, and will play on Saturday against the Titans (Twitter link via ESPN’s Ben Baby). 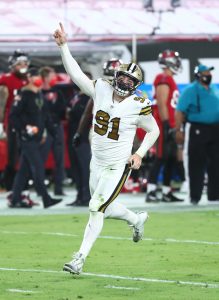 Hendrickson, the team’s top pass rusher, suffered the injury during last week’s win over the Raiders – Cincinnati’s first postseason victory in over 30 years. He still made an impact, though, registering a sack and one forced fumble prior to leaving the game.

The 27-year-old was one of the biggest additions the team made in the offseason, signing a four-year, $60MM deal in March after a productive start to his career in New Orleans. So far, he has been worth every penny. In 16 games this year, Hendrickson recorded a team-high 14 sacks, along with 34 total tackles and three forced fumbles. In general, he has played a major role in the team’s defensive turnaround from previous years, which is one of the reasons they seemed poised to be AFC contenders for the foreseeable future.

Hendrickson will not doubt have a lot to do with the Bengals’ fortunes, good or bad, in the Divisional Round when they visit the AFC’s No. 1 seed.

Trey Hendrickson is getting paid following his breakout campaign. NFL.com’s Tom Pelissero reports (via Twitter) that the defensive end is signing with the Bengals. It’s a four-year deal worth $60MM, including $32MM in the first two years.

The 2017 third-round pick out of Florida Atlantic had spent his entire four-year career in New Orleans, including a 2019 campaign where he collected 4.5 sacks in 13 games (three starts). The Saints inserted him into the starting lineup in 2020, and the 26-year-old responded with a career year.

Hendrickson ultimately started each of his 15 games this past season, compiling 25 tackles, 25 QB hits, and 13.5 sacks. That performance earned him a first-team All-Pro nod following the season. Despite that standout performance, it’s not a huge surprise that Hendrickson isn’t sticking around New Orleans; we heard back in February that the defensive end may be too pricey for the cash-strapped Saints.

Earlier today, we learned that Hendrickson was connected to the Jets, Vikings, Browns, and Bengals. Cincinnati always seemed like a natural sutior for a pass rusher. The Bengals front office did not place its franchise tag on Carl Lawson, who ultimately signed with the Jets. That opened up a clear hole on Cincy’s defensive line.

With Shaquil Barrett off the board after his re-signing with Tampa Bay the group of free agent pass-rushers took a hit, but there are still plenty of quality options available. One of those options is the Saints’ Trey Hendrickson, and we now have details on what the bidding for his services looks like.

The Jets, Vikings, and Browns have all shown interest in signing Hendrickson, a source told Josina Anderson of ESPN (Twitter link). Anderson notes that list is in no particular order. We’ve heard all offseason that the Browns are looking to add a pass rusher next to Myles Garrett, so their interest isn’t surprising.

The Bengals are also interested in Hendrickson, per Anderson (on Twitter). Cincinnati did not place its franchise tag on Carl Lawson, running the risk of letting the emerging pass rusher defect in free agency. It will be interesting to see the prices for Hendrickson and Lawson. The former broke out in 2020, while the latter has been a producer for a bit longer.

Tony Pauline of Pro Football Network followed up with a tweet noting that the Jets view Hendrickson as a “great fit” for new coach Robert Saleh‘s system. New Orleans is in a really tough cap situation, and GM Mickey Loomis seemed to acknowledge last month that Hendrickson moving on was likely.

Hendrickson was a revelation last year, coming out of nowhere to start 15 games and rack up 13.5 sacks. The 2017 third-round pick had previously had only 6.5 sacks total over his first three years in the league, but set himself up nicely for a big payday in 2020. It’ll be very interesting to see what kind of contract he ends up landing. Yannick Ngakoue is another big edge rushing domino waiting to fall.

Saints May Be Unable To Retain DE Trey Hendrickson

Defensive end Trey Hendrickson was a revelation for the Saints in 2020, piling up 13.5 sacks in an unexpectedly strong platform year. Selected by New Orleans in the third round of the 2017 draft, Hendrickson had never started more than three games nor played in more than 38% of the club’s defensive snaps prior to the 2020 campaign, but he started 15 regular season contests and logged 53% of the Saints’ defensive snaps last year.

As a result, he finds himself being mentioned alongside players like Shaquil Barrett, Yannick Ngakoue, and Bud Dupree as quality pass rushers eligible to hit the open market next month. The Saints would certainly like to keep Hendrickson, but it’s unclear if they will be able to make a competitive offer.

Last week, we learned that the 2021 salary cap was likely to fall between $180MM-$181MM, which represents a significant decrease from the 2020 figure of $198.2MM. Even before the drop, the Saints were projected to be well over the salary cap, and while the club has started to reduce its cap commitments by agreeing to a renegotiated deal with retiring QB Drew Brees and releasing OL Nick Eason, there is still a lot more work to be done.

Former NFL agent and current CBS Sports analyst Joel Corry details how the Saints can bring themselves under the cap with a series of cuts and restructures, none of which seem particularly difficult to pull off (though they do include the type of machinations that have led to the Saints being right up against the cap, or over it, every offseason). His proposals do not contemplate an extension for Hendrickson, however, whom Corry says may have priced himself out of New Orleans.

Indeed, GM Mickey Loomis recently acknowledged that Hendrickson, 26, is “going to be an attractive free agent for anyone” (via Amie Just of NOLA.com). Loomis, who was speaking before the recent reports concerning the 2021 salary cap, said, “I can’t really say how strong a play we can make for that until I understand where the cap’s gonna be this year and as we go through the roster evaluations and start making our choices.”

Assuming the cap does settle in at around $180MM, a franchise tag for Hendrickson would cost about $14.5MM, and it’s unlikely the Saints would be able to carry that full amount on their books in 2021. So the only way for them to retain Hendrickson would be via a multi-year contract, and while the reduced cap could suppress the price tags of some players, it might still be difficult for New Orleans to bring back the Florida Atlantic product.

Hendrickson will doubtlessly be shooting for a deal worth at least $15MM per season, along with guarantees in the $30MM-$40MM range. He does not currently offer much by way of run defense or pass coverage, but the raw sack total he posted will attract plenty of attention, and he should find at least one team willing to meet his asking price. Whether that team is the Saints, who also have decisions to make on fellow free agents Marcus Williams and Sheldon Rankins, is very much an open question.

The Chiefs‘ offense bounced back after a rough stretch, going off for 31 points and four Alex Smith touchdown passes in a loss to the Jets. While Kansas City’s defense couldn’t hold up in a shootout, the team will be sticking with the offensive setup that authored the mini-turnaround. OC Matt Nagy will continue to call plays, B.J. Kissel of KCChiefs.com tweets. The 474 yards the Chiefs put up were the most since their 537-yard explosion against the Patriots in Week 1. The Chiefs host the Raiders in what’s close to a must-win game. Nagy has been mentioned as a head-coaching candidate, and these games he has play-calling responsibilities could be a key factor in whether he’ll get that opportunity in 2018.