J.C. Jackson will make his Chargers debut tonight. James Palmer of NFL Network reports (on Twitter) that the cornerback will play tonight against the Chiefs. 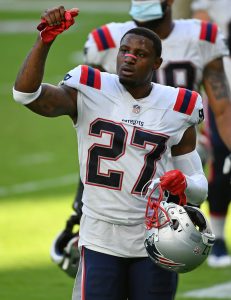 Jackson was considered a game-time decision coming into Thursday. The offseason acquisition missed Week 1 while recovering from late-August ankle surgery. Palmer notes that the cornerback looked good during practice this week, and he’ll give it a go tonight against Patrick Mahomes and the Chiefs.

The 26-year-old joined Los Angeles this offseason on a five-year, $82.5MM contract. He’s expected to slide in opposite former second-round pick Asante Samuel Jr. at cornerback. Michael Davis, who got into 100 percent of the Chargers’ defensive snaps in Week 1, will likely see a backup role with Jackson in the lineup.

Jackson spent the first four seasons of his career in New England, evolving from an undrafted rookie into a second-team All-Pro. The cornerback has 25 career interceptions in 62 career games, including 17 picks over the past two years. He also led the league with 23 passes defended in 2021.

Elsewhere on the injury front for Thursday Night Football, Chiefs offensive lineman Trey Smith will play tonight, according to Palmer (via Twitter). The lineman suffered an ankle injury during Kansas City’s Week 1 victory, leading to a questionable designation heading into tonight’s game. After being a limited participant in practice on Tuesday, he was a full participant on Wednesday.