Chiefs tight end Travis Kelce has been ruled out for today’s game against the Steelers (Twitter link via NFL.com’s Ian Rapoport). There was hope yesterday that he could be cleared in time, but Kelce ultimately did not test out the league’s COVID-19 protocol. 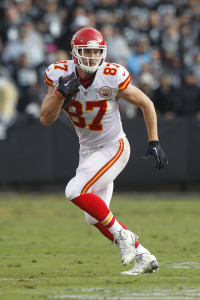 Tyreek Hill was given the green light on Saturday, but Kelce, linebacker Nick Bolton, and offensive tackle Lucas Niang will have to sit this game out. Fortunately for the Chiefs, they more or less have their playoff spot clinched and the AFC West title in hand. Still, a loss today coupled with a Patriots victory over the Bills would hurt their chances of a first-round bye.

Kelce, 32, has 83 catches for 1,066 yards and seven touchdowns so far this year. Just last week, he earned yet another Pro Bowl nod, giving him seven for his career.

The Chiefs, sans Kelce, will look to backup TEs Blake Bell and Noah Gray for blocking as they look for their eleventh win of the year.

The Chiefs will have Tyreek Hill in uniform for tomorrow’s game against the Steelers (Twitter link via Adam Schefter of ESPN.com). Meanwhile, they’re still awaiting word on tight end Travis Kelce, who has yet to be given the green light. 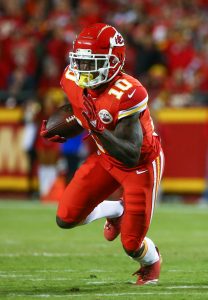 The Chiefs have, for all intents and purposes, punched their ticket to the playoffs as well as the AFC West title. Still, they’re pushing to lock up a first-round bye over the next few weeks. A loss to the Steelers, coupled with a Pats win, would knock them out of the lead.

Hill, 27, has 102 catches for 1,178 yards and nine touchdowns through 14 games. Kelce’s also in the midst of a strong year with 83 catches for 1,066 yards and seven touchdowns. If he’s not cleared in time, this will mark his first missed game of the year and just his third missed game since 2014. If Kelce can’t go, the Chiefs will lean on backup tight ends Blake Bell and Noah Gray for blocking support.

Hours after the 49ers and tight end George Kittle agreed to a record-breaking extension, the Chiefs agreed to a new deal with their own stud TE, Travis Kelce. It’s a four-year, $57.25MM deal with $28MM guaranteed, according to Adam Schefter of ESPN.com (via Twitter). On Friday morning, the Chiefs officially announced Kelce’s new contract.

Kelce was already under club control through 2021, and the extension will be added onto that pact, keeping the five-time Pro Bowler with Kansas City through 2025, his age-36 season. He will not take home any new money this year, as Albert Breer of SI.com tweets, but he will be due a sizable guaranteed roster bonus early next year. The Chiefs, of course, authorized a historic ten-year contract for QB Patrick Mahomes just last month, so the league’s premier QB-TE combo will have a chance to bring home several more Lombardi Trophies before their time together is up.

Selected by the Chiefs in the third round of the 2013 draft, Kelce began to make his mark in his sophomore campaign, recording 67 catches for 862 yards and five scores. He followed that up with a similarly productive 2015 season, which culminated in his first Pro Bowl appearance. KC rewarded him with a five-year, $46MM extension that today’s deal builds on, and that’s when Kelce really took off.

He has recorded four consecutive seasons with over 1,000 receiving yards, the first tight end to ever accomplish that feat, and he has earned two First Team All-Pro nods during that time. He and Mahomes have been nothing short of dominant, and with Kelce creating mismatches down the seams and over the middle, speed merchants like wide receiver Tyreek Hill have had even more room to run.

Though the Chiefs suffered a difficult loss in the AFC Championship Game following the 2018 season, they won it all last year, with Kelce catching 19 balls for 207 yards and four TDs in the team’s three-game postseason jaunt through the Super Bowl. If they go back-to-back in 2020, as many are predicting, Kelce will be a big reason why.

The Cincinnati product did not quite match Kittle’s $15MM AAV, but he is also four years older than Kittle, is not called upon to block as much, and has already earned a boatload of money in his playing career. At this point, he is just trying to add more to his Hall of Fame resume, and he is in a great spot to do just that.

Ian Rapoport of NFL.com first reported that Kelce and the Chiefs were on the verge of a long-term accord (Twitter link).

Travis Kelce will check off another career milestone this weekend when he makes his first Super Bowl appearance. Four years ago today, he achieved one of the first major accomplishments, inking a five-year extension with the Chiefs.

Back when the deal was signed in 2016, Kelce was an up-and-comer at the tight end position. The former third-rounder had compiled 850-plus receiving yards and five touchdowns for the second-straight season, and he earned his first Pro Bowl nod. Despite the production, Kelce was still working to endear himself to the organization. Kelce missed his entire rookie season recovering from knee surgery, and coach Andy Reid referred to him as “immature” following an incident during his sophomore campaign.

Still, the organization believed in him enough to give him a market-setting five-year, $46MM extension (with a bit more than $20MM guaranteed). In hindsight, that deal ended up working out brilliantly for the Chiefs. Kelce has evolved into the league’s premier tight end, averaging 92 receptions, 1,182 receiving yards, and 6.75 touchdowns over the past four seasons.

That extension is set to expire following the 2020 season, and assuming Kelce remains relatively healthy, he should earn another lucrative payday. The $46MM deal is still the highest at the position, but the veteran has predictably been surpassed in guaranteed money (where Trey Burton, Jordan Reed, and Zach Ertz top Kelce) and average value (Jimmy Graham is the leader).

Austin Hooper, Hunter Henry, and Eric Ebron are among the players hitting free agency this offseason, so there’s a chance the market could reset. Kelce will surely have his eye on those various deals as he prepared for the 2021 offseason. For now, the tight end is going to prepare for the biggest game of his life, although he may briefly think back to four years ago today when he inked his extension with the Chiefs.

The Browns and Titans have done an admirable job of setting themselves up well for the upcoming draft, writes ESPN.com’s Kevin Seifert. Cleveland acquired three extra draft picks this season, and they’re guaranteed to have at least two picks in each of the first four rounds. Despite the fact that the 2017 draft is expected to feature weak quarterback offerings, Seifert believes the Browns could still select a signal-caller with one of their many picks.

Meanwhile, the Titans have the Rams’ first-round and third-round picks in this year’s draft, and the presence of Marcus Mariota means they won’t have to reach for a quarterback. In total, the team will have eight picks, including five in the first three rounds.

Let’s check out some other notes from the AFC…