Carson Wentz‘s first season in the nation’s capital has been put on pause due to the finger injury he suffered during the team’s Week 6 game. He has since undergone surgery, but is facing a multi-week absence. His immediate replacement was confirmed on Tuesday. 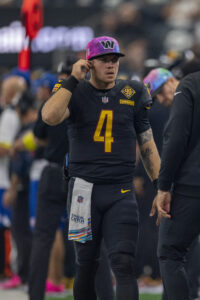 Head coach Ron Rivera named Taylor Heinicke Washington’s starting quarterback for Week 7 against the Packers. That comes as little surprise, given his experience with the team and the total lack thereof regarding the alternative, rookie Sam Howell. “We think he’s on track,” Rivera said of Howell, “but Taylor right now gives us the best opportunity to be successful” (Twitter link via Nicki Jhabvala of the Washington Post).

Heinicke, 29, is in his third season with Washington. He dressed for only one regular season contest in 2020, but made a name for himself in the playoffs in a one-score loss to the eventual Super Bowl champion Buccaneers. That landed him a two-year extension laden with playing-time incentives.

He started all but one regular season contest he appeared in last year, going 7-8 and completing 65% of his passes. His 6.9 yards per attempt average and 20:15 touchdown-to-interception ratio left plenty to be desired, and made Washington a key player in the offseason QB market. They made a sizeable move in trading for Wentz, but it was made clear after the draft that Heinicke would remain his backup.

Howell will dress as the QB2 on Sunday, after being inactive for the first six weeks of the campaign. The 22-year-old burst onto the scene at North Carolina, throwing 38 touchdowns as a freshman in 2019. After a successful sophomore season, his passing numbers took a step back in 2021, though he added 828 yards and 11 scores on the ground. He ultimately fell to the fifth round – joining a number of other passers in April’s underwhelming class on Day 3 – setting him up for what the team hopes will be a strictly developmental season.

In a depth move to in the wake of Wentz’s absence, the Commanders also signed Jake Fromm to the practice squad, per a team announcement. The former Bills draftee started twice for the Giants last year, and recently worked out with the Dolphins amidst their QB injury woes. A decision on whether or not Wentz will be placed on IR, meanwhile, is expected to be made later this week, reports CBS Sports’ Josina Anderson (Twitter link).

On Friday, the Bills agreed to terms with three of their picks from the 2020 NFL Draft. Second-round edge rusher A.J. Epenesa, fourth-round receiver Gabriel Davis, and fifth-round quarterback Jake Fromm are all under contract, per a club announcement.

Epenesa was viewed as a first-round prospect, up until a shaky showing at the combine. There, the Iowa product ran a slower-than-expected 5.04-second 40-yard dash and lacked athleticism at 275 pounds. Still, he’s coming off of double-digit sacks in back-to-back seasons and also profiles as a solid defender against the run.

Fromm also saw his stock slip. At one point in time, evaluators said he’d be the No. 1 overall pick. Then, last year happened – the Georgia QB completed just 60.8% of his passes and most scouts now see him as a solid backup type. That’ll be his role in Buffalo, where he’ll sit behind Josh Allen.

With this trio officially in the fold, the Bills’ only remaining straggler is third-round running back Zack Moss. Here’s the full rundown of their draft class, via PFR’s team-by-team tracker:

The wait is over for Georgia quarterback Jake Fromm. He’ll join the Bills, who have selected him with the No. 167 overall pick, a fifth round choice.

Fromm was once viewed as a potential No. 1 overall pick, but he took himself out of the running with an iffy 2019. Last year, Fromm completed just 60.8% of his throws, the lowest rate of his collegiate career. Still, the Bills see potential in Fromm, who led the Bulldogs to the National Championship Game as a true frosh in 2017.

Over time, Fromm lost his footing to Joe Burrow (LSU), Tua Tagovailoa (Alabama), Justin Herbert (Oregon), Jordan Love (Utah State), Jacob Eason (Washington), and other signal callers. In the not too distant past, Fromm was viewed as a potential NFL starter. Now, the feeling is that he’s a quality QB2 in the making.

Fromm will work to improve his arm strength in Buffalo as he slots behind former first-round pick Josh Allen in Buffalo. The Georgia native might not be a world-beater, but his football smarts should allow him to find a home in WNY.