12:06pm: Thibodeaux did not escape the situation unscathed. Tests revealed the No. 5 overall pick suffered an MCL sprain, Adam Schefter of ESPN.com tweets. Although Thibodeaux did not tear his ACL or meniscus, he is expected to miss at least three weeks. The Giants remain hopeful their top pick will be ready for Week 1, but it would not surprise if the organization exercised caution here.

Beavers was not as fortunate. The sixth-round pick suffered a torn ACL, the team confirmed. Beavers is the second Giants 2022 draftee to sustain that injury this summer, following fifth-round offensive lineman Marcus McKethan.

9:05am: The Giants won their preseason contest against the Bengals last night, but the main takeaway from the game was the injury scare regarding first-round rookie Kayvon Thibodeaux. The defensive end suffered a knee injury, but there are encouraging signs that no serious damage was done. 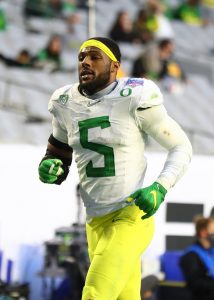 Thibodeaux was sidelined after he was on the receiving end of a low cut block, and did not return to the game. After the contest was over, though, the fifth overall pick was seen walking without a limp, and said “I’m good. … We’re good. Good news” (video link via ESPN’s Jordan Raanan).

Likewise, there is “initial optimism” that the Oregon product has avoided anything serious, as detailed by Jeremy Bergan of NFL.com. More testing will be done today to gather further information, but the belief that Thibodeaux will not be unavailable for any extended period is significant news for himself personally and the Giants collectively.

Once labeled a favorite to be selected No. 1 overall in this year’s draft, the six-foot-five, 250-pounder had an underwhelming final college season and was considered a candidate to fall down the board. Instead, the Giants committed to him emerging as one of – if not the top – pass-rushers in the class, something which the team sorely needs after ranking 22nd in the league in sacks last season.

The news isn’t all good on the injury front for Big Blue, however. NFL Network’s Mike Garafolo tweets that fellow rookie Darrian Beavers is likely to have suffered a major knee injury. More will be known later today for the sixth-round linebacker, but he will all-but assuredly miss significant time, keeping in line with the many injuries the Giants are currently dealing with. In the case of their top prospect, at least, the situation is an optimistic one.