Arthur Smith will bring another of his former Titans charges to Atlanta. The Falcons agreed to a one-year deal with Anthony Firkser on Tuesday. 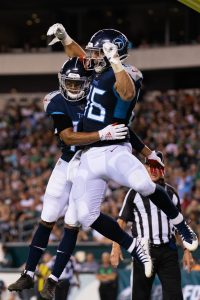 This comes not long after the Titans added ex-Falcon tight end Austin Hooper. Not as accomplished as the former Atlanta and Cleveland pass catcher, Firkser waited a bit longer to find a home in free agency. But he will see some familiar faces with the Falcons.

Smith coached Firkser for the first three seasons of his career, the first as his position coach and the next two as Titans offensive coordinator. Firkser, 27, will rejoin Marcus Mariota on a Falcons team that has also added ex-Titans linebacker Rashaan Evans this offseason. Firkser should be expected to fill the No. 2 tight end role behind Kyle Pitts, one vacated after Hayden Hurst signed with the Bengals last month.

The Titans not using their franchise tag on Jonnu Smith led the previous starter to the Patriots, though this defection did not exactly lead to a Firkser production increase. After a 39-catch 2020 season, the Harvard alum snared 34 passes for just 291 yards last season. Those numbers still led Titans tight ends. On a Falcons team currently without much at wide receiver, Firkser could see similar opportunities.

Titans tight end MyCole Pruitt suffered a fractured and dislocated ankle during today’s game against against the Dolphins (Twitter link via NFL.com’s Tom Pelissero). Now set for surgery, Pruitt will surely be out for the rest of the season, including the playoffs.

Pruitt, 29, had 14 catches for 145 yards and three touchdowns heading into today’s game. The Titans went on to win 34-3, but they’ve lost an essential run blocker heading into the postseason.

The Titans will still have veteran Geoff Swaim and Anthony Firkser on the roster and they have Austin Fort on the practice squad. Tennessee uses multiple tight end sets pretty frequently to leverage their rushing attack and they’ve utilized all three of their tight ends pretty equally with all three getting their fair share of snaps. Through Week 16, Swaim led the group playing 58.6% of the offensive snaps, Pruitt followed with 44.4%, and Firkser was on the field for 33.4%. None are really receiving threats, so the two remaining tight ends will continue to fill their role and Tennessee will hope a player like Fort can step up in heavy packages or when called upon to give his teammates a breather.

As for Pruitt, the hope is that the severity of the injury is low and the recovery from the surgery is quick as he heads into the offseason as a free agent. On a lucky note, Swaim and Firkser are also in contract years, so if the Titans like their trio of tight ends, it may be an easy decision to extend any combination of the three.