Carl Davis is returning to New England. The nose tackle is re-signing with the Patriots, reports ESPN’s Field Yates (on Twitter). 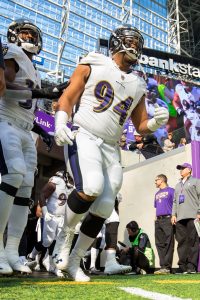 Davis joined the Patriots during the 2021 season, and he’s seen time in 20 games over his year-plus with the organization. This includes a 2021 campaign where the defensive lineman appeared in all 17 games (four starts), finishing with 19 tackles and one sack.

Davis was originally a 2015 third-round pick by the Ravens. He lasted three years in Baltimore, and in between his stint in New England, he had gigs with the Browns, Colts, and Jaguars. In total, the 30-year-old has seen time in 56 regular season games.

Davis will be hard pressed to play a significant role on New England’s defense in 2022, especially if 2021 second-round pick Christian Barmore continues to develop. The Patriots are also rostering Davon Godchaux, who the Patriots inked to a two-year deal last offseason.

Barely a month after re-signing Carl Davis, the Jaguars plan to cut him. The Jags will part ways with the veteran defensive lineman, Aaron Wilson of the Houston Chronicle tweets.

Davis signed a one-year, $1.1MM deal with the Jags in early April. However, the five-year veteran will not be available until Week 5. The NFL handed him a four-game suspension in February for violating its performance-enhancing drug policy.

The former Ravens third-round pick caught on with the Jaguars last season, playing in two games. Davis has not suited up for more than five games in a season since 2017, when he started nine with the Ravens. The Iowa product has since spent time with the Browns, Colts and Jags.

Although the Jaguars traded Calais Campbell to the Ravens and have seen Yannick Ngakoue attempt to force a tag-and-trade scenario, they devoted key draft resources to the group by using a first-round pick on LSU’s K’Lavon Chaisson in Round 1 selecting Davon Hamilton in Round 3.

The Jaguars announced that they’ll bring back Carl Davis for another year. However, the defensive tackle will not be available for the first month of the season thanks to his four-game ban.

Davis violated the league’s performance-enhancing substance policy, resulting in a suspension to start the year. Naturally, that inhibited Davis’ market as he talked with clubs in March.

The 2015 third-round pick spent his first three seasons with the Ravens, tallying 30 tackles, half-a-sack, and three passes defended in 28 games (12 starts). His 2016 season was derailed by a knee injury, and he was limited down the stretch of the 2017 campaign with a hamstring issue.

After being released by the Ravens before the 2018 campaign, he hooked on with the Browns. Despite re-signing with the squad the following offseason, he was released by Cleveland following the 2019 preseason. He ultimately appeared in three total games for the Colts and Jaguars last year, collecting a single tackle.

Defensive tackle Carl Davis has been suspended for the first four games of the 2020 season, according to Josh Alper of ProFootballTalk.com. The impending free agent has been banned for violating the league’s performance-enhancing substance policy.

The 2015 third-round pick spent his first three seasons with the Ravens, compiling 30 tackles, 0.5 sacks, and three passes defended in his 28 games (12 starts). His 2016 season was derailed by a knee injury, and he was limited down the stretch of the 2017 campaign with a hamstring issue.

After being released by Baltimore prior to the 2018 season, he landed with the Browns. Despite re-signing with the squad the following offseason, he was released by Cleveland following the 2019 preseason. He ultimately appeared in three total games for the Colts and Jaguars last year, collecting a single tackle.

Davis is set to hit free agency. Considering he won’t see the field until October at the earliest, he might struggle to find his next gig.