Part of the Raiders’ struggles this season has been an underwhelming performance by the team’s defense. Aside from a notable coaching decision made last week, though, no major changes with respect to players or coaches will be coming any time soon. 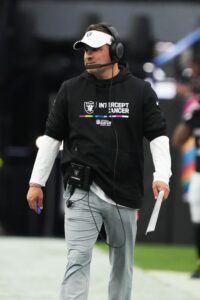 Las Vegas ranks 28th in the league in both total and scoring defense, despite a number of moves made in the offseason which led to heightened expectations the unit could at least effectively complement the Raiders’ talented array of skill-position players. That included bringing in Patrick Graham as defensive coordinator after he spent the past two seasons in the same capacity with the Giants.

One element of the team’s lackluster performance to date has been its pass rush. Despite having a starting edge tandem of Maxx Crosby and Chandler Jones, the Raiders have registered a league-worst 10 sacks this season. The latter has accounted for just 0.5 of that total, a figure which marks a major disappointment relative to the $52.5MM deal he signed this offseason. Significant alterations to the rotation, or along the sidelines, are not being considered for the remainder of the season, however.

“What’s the alternative?” head coach Josh McDaniels said, via Tashan Reed of The Athletic (subscription required). “I think that’s our job to look at that and consider it that way, but I also think throwing things out there just because you’re frustrated with the results doesn’t necessarily mean that the results are going to change for the better at all. Matter of fact, they could get dramatically worse.”

Eyebrows were raised this past Sunday when three notable defenders were deactivated. Defensive linemen Clelin Ferrell, Matthew Butler and Neil Farrell were each healthy scratches for the team’s 25-20 loss to the Colts. Reed tweets that the decision was made as a result of an unspecified non-football matter.

Amidst the Raiders’ 2-7 campaign, questions have been raised about the commitment level of certain players, a list which may include Pro Bowl tight end Darren Waller. McDaniels’ job security has also been a talking point in recent weeks, though owner Mark Davis emphatically put an end to speculation about a change being made in that regard in at least the intermediate future. The same will apparently hold true both on the field and the sidelines for the team’s defense.

Johnathan Hankins is heading back to the NFC East. The Raiders are sending their longtime defensive tackle to the Cowboys, according to NFL.com’s Ian Rapoport (on Twitter). 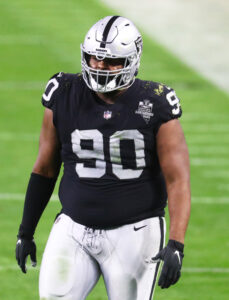 This is a pick-swap trade. Dallas will send a 2023 sixth-round pick to Las Vegas for the 10th-year defender, per Tom Pelissero of NFL.com tweets, adding that a 2024 seventh will go back to the Cowboys (Twitter links). It will mark Hankins’ third career team change.

After a mid-career stopover with the Colts, Hankins enjoyed a lengthy Raiders run. The former Giants second-round pick started 61 games with the Raiders. Only one of those came this season, which has seen Hankins’ defensive snap rate drop from 58% to 37%. Hankins, 30, had played at least 58% of the Raiders’ defensive snaps in each of his previous four seasons with the team.

While the Raiders had a regular role carved out for the 340-pound defender, big money did not follow. The Colts gave Hankins a three-year, $27MM deal in 2017, but they cut bait a year later. Since, Hankins has signed a host of short-term, lower-cost agreements. This latest deal will not hit the Cowboys’ cap too hard. Hankins signed a one-year, $1.33MM accord this offseason, being one of many midlevel defensive linemen to sign with the Raiders during Josh McDaniels‘ first months at the helm.

At his best, Hankins was known as a plus run-stopping presence. The Cowboys are in greater need in that area than they are for pass-rushing help, and the Dallas Morning News’ David Moore notes the team indeed discussed adding Hankins on Monday to help shore up its run defense (Twitter link). So much for Jerry Jones‘ “I don’t see a trade” forecast. Dallas leads the NFL in sacks (29) but ranks just 20th against the run.

Although Hankins took a backseat to new Raiders starters Andrew Billings and Bilal Nichols this season, he will be added to the Cowboys’ interior rotation. Hankins has spent most of his career as a 4-3 D-tackle. He will join the likes of Osa Odighizuwa, Quinton Bohanna, Trysten Hill and Neville Gallimore in Dallas. Gallimore was inactive for the Cowboys’ Week 7 game. Progression of Raiders rookie D-tackles Neil Farrell and Matthew Butler helped lead to this trade, The Athletic’s Vic Tafur tweets.

Raiders Not Expecting Any Rookies To Start In 2022

A rumor that isn’t totally surprising given the situation, after not making a selection in the 2022 NFL Draft until near the end of Day 2, Las Vegas does not expect any of their rookies to man starting roles this season, reports Vincent Bonsignore of the Las Vegas Review-Journal.

This marks a departure from the recent trend for the Raiders, when desperate needs on the depth chart forced players like Josh Jacobs, Henry Ruggs, Kolton Miller, Clelin Ferrell, and others onto the field as rookies. The lack of Day 1 and 2 picks combined with a more well-staffed roster puts Las Vegas in a situation wherein they don’t have to rush the development of their rookie class.

The Raiders spent two picks on running backs in April. The team selected Georgia running back Zamir White in the fourth round and UCLA running back Brittain Brown in the seventh. White is a talented back once considered the top recruit in the country at his position in high school. A couple of ACL injuries and a logjammed running backs room in Georgia led to a less impactful career with the Bulldogs than expected, but White still led the team in rushing yards the past two seasons with 779 yards in 2020 and 856 yards in 2021 while scoring 11 touchdowns in each season. Brown had his best season as a freshman at Duke but transferred to UCLA after Deon Jackson took over in Durham. He was the No. 2 running back in a two-back system in Los Angeles both years with Demetric Felton in 2020 and Zach Charbonnet in 2021.

The Raiders’ starting running back job is not up for competition. Even after a down year in 2021, incumbent Josh Jacobs will return as the lead-back in Las Vegas. Kenyan Drake returns as the primary backup, as well. White will likely have a talent edge over Brandon Bolden, but Brown will need to work hard to displace Bolden for a spot on the 53-man roster.

Also on offense, the Raiders spent their first pick of the draft on Memphis offensive lineman Dylan Parham in the third round and added Ohio State offensive tackle Thayer Munford in the seventh. Parham is an athletic lineman, moving from tight end to the offensive line while redshirting for the Tigers. He started all four seasons after redshirting and worked at left guard, center, right guard, and right tackle during his tenure, starting games at every position except center. Munford was a four-year starter (utilizing his extra year of eligibility granted due to COVID-19) after spending his freshman year as a reserve lineman. He started his sophomore through senior seasons as a tackle, but moved to left guard for his super-senior season.

Parham has the best chance of any of the Vegas rookies to start next year, but certainly won’t be forced to, as the Raiders have some position battles going on within the offensive line. Andre James and Kolton Miller should return to their respective starting positions of center and left tackle. Some combination of John Simpson, Denzelle Good, and Alex Leatherwood are expected to fill out the right tackle and guards positions. Parham could potentially find his way into one of the starting guard spots, depending on how the dominos fall, but more likely will find himself as the sixth-man of the offensive line who can fill in at any position, similar to Patrick Mekari‘s role in Baltimore. Munford on the other hand is cemented a bit further down the depth chart as a reserve tackle. Munford has a lot of the physical tools to become a contributor in the NFL and his situation in Las Vegas will allow him to develop his ability to use those tools over time.

The other two draft picks the Raiders used in 2022 were spent on defensive tackles. The team selected LSU’s Neil Farrell Jr. in the fourth round and Tennessee’s Matthew Butler in the fifth. Farrell won a national championship with the 2019 Tigers and went on to use his extra year of eligibility in 2021. Butler played in 52 games for the Volunteers and earned 9.5 sacks during his tenure.

Neither Butler nor Farrell are expected to have much of an impact on the Raiders defensive line this year. Entrenched behind Johnathan Hankins, Bilal Nichols, Kyle Peko, and Vernon Butler on the depth chart, the rookie Butler and Farrell are depth pieces in the middle. If the rookies develop quickly and prove to be more impactful than Peko and the older Butler, they can really get some substantial playing time. As it is, though, the two rookies will find their playing time as reserves for a position that rotates often.

After running through the picks, the initial comment makes a lot of sense. It’s not necessarily that the rookie picks aren’t talented enough to be starters in the NFL, but, with the Raiders’ current roster, there’s no need to force any of their first-year players into a starting role for which they aren’t yet ready.