The Patriots cut down their roster to 53 players today. In the process, they let go of a handful of recent draft picks, including a 2022 selection:

The Patriots acknowledged some of their previous draft mistakes today. The team let go of three 2021 draft picks in wide receiver Tre Nixon, linebacker Will Sherman, and linebacker Cameron McGrone, and they even let go of a 2022 draft pick in sixth-round running back Kevin Harris. However, perhaps the biggest move was releasing tight end end Devin Asiasi. After waiving fellow 2020 third-round tight end Dalton Keene earlier this month, Asiasi was let go today. Despite his third-round status, Asiasi only saw time in 10 games for the Patriots in two years. With Asiasi and Keene out of the picture, it was expected that Lil’Jordan Humphrey would make the squad as a hybrid WR/TE. However, for the time being, the Patriots will roll with only two tight ends in Hunter Henry and Jonnu Smith.

Terrance Mitchell started 29 games over the past two seasons in stints with the Browns and Texans, and he had a chance to compete for a starting gig in New England. However, despite all the uncertainty surrounding the position, the veteran wasn’t able to make his mark, leading to a surprising release. Justin Bethel is another surprising cut, as the veteran has established himself as a special teams ace in recent years.

While the Patriots lack a traditional No. 1-type wide receiver, the team has a host of notable options vying for spots. New England added another one Wednesday, agreeing to terms with former New Orleans contributor Lil’Jordan Humphrey, Ian Rapoport of NFLcom tweets. 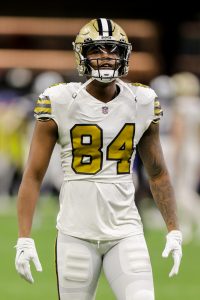 Humphrey is joining the Pats on a one-year deal, adding an additional depth piece. Although it will not be automatic the fourth-year veteran makes the team’s 53-man roster, Humphrey is coming off a season that featured his first extended usage on offense.

A seldom-used backup over his first two seasons, the former Texas Longhorn played a role for the Saints on offense. New Orleans’ Michael Thomas-less season — a year in which the team started four quarterbacks — led to a host of wideouts seeing time. Humphrey averaged 19.2 yards per catch (13/249) and scored twice last season. His final Texas season produced an 86-catch, 1,176-yard, nine-touchdown stat line. The 6-foot-4, 225-pound wideout left school after that junior year.

Despite coming into the league as a UDFA three years ago, Humphrey is only going into his age-24 season. He will join a Pats receiving corps that houses holdovers Kendrick Bourne, Jakobi Meyers and Nelson Agholor. New England traded for DeVante Parker and drafted Tyquan Thornton in the second round. Perennial trade candidate N’Keal Harry remains rostered, too, and the Pats also added ex-Humphrey Saints teammate Ty Montgomery this offseason.