The Cowboys haven’t been too active so far in free agency, but they’re now making a smaller move to keep one of their own in the fold. Dallas has agreed to terms on a new deal for cornerback/special teamer C.J. Goodwin, agent Drew Rosenhaus tells Ian Rapoport of NFL Network (Twitter link).

It’s a two-year deal for $3.5MM with $2MM guaranteed, Rapsheet notes. Goodwin only played 18 defensive snaps last year but is one of the team’s most important special teams players, as he played over 70 percent of the total defensive snaps. Goodwin came into the league as an UDFA with the Steelers in 2014, but he didn’t crack the field until 2016 with the Falcons.

He carved out a role as a special teamer, and even started a game on defense for Atlanta that year. The D2 product was cut by four different teams in 2018 before signing with the Cowboys off the Bengals’ practice squad, and he’s now been in Dallas the past three seasons. Getting $2MM guaranteed is a massive win for a player with his story, so we all tip our cap to him.

The Cowboys are adding some reinforcement to their secondary. NFL.com’s Ian Rapoport reports (via Twitter) that Dallas has activated cornerback C.J. Goodwin from injured reserve. 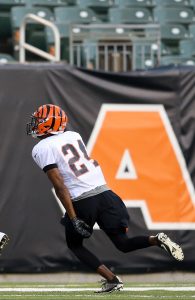 The Cowboys signed Goodwin off the Bengals practice squad back in October. The 28-year-old went on to appear in two games for Dallas before breaking his forearm. Goodwin subsequently underwent surgery and was placed on injured reserve.

The cornerback has bounced around the NFL a bit since entering the league as an undrafted free agent in 2014, spending time with the Steelers, Falcons, Cardinals, Giants, 49ers, and Bengals. He played in 28 total games between 2016 and 2017, compiling 26 tackles and two passes defended.

The Cowboys could use some extra help at cornerback, especially after Anthony Brown missed Week 16 with a back injury. That left Jourdan Lewis as the lone cornerback behind Byron Jones and Chidobe Awuzie, so Goodwin will provide some insurance for that trio. At the very least, Goodwin will have an opportunity to contribute on special teams.