The quadriceps injury Jamal Adams suffered early in Week 1 will end his season. The veteran safety plans to undergo surgery to repair a torn quad tendon, Ian Rapoport of NFL.com reports (on Twitter).

Adams sought additional opinions from doctors this week, but the conclusion will bring a quick end to the former All-Pro defender’s sixth NFL season. The Seahawks will move Adams to IR, and Rapoport adds they are signing cornerback Teez Tabor off the Falcons’ practice squad (Twitter link). 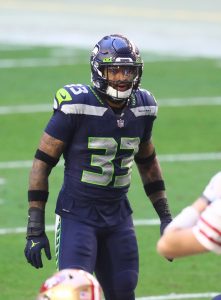 This deals the Seahawks’ defense a major blow, and it continues a string of Adams unavailability since he was traded to Seattle in 2020. Adams, however, only missed four and five games, respectively, during the 2020 and ’21 seasons. This will be new territory. He played 15 snaps against the Broncos. Adams only missed two games during his three-season Jets tenure.

With Jets contract negotiations not progressing, the Seahawks stepped in with a monster trade offer to acquire the former top-10 pick. The Seahawks sent two first-round choices, a third-rounder and veteran safety Bradley McDougald to the Jets for Adams. After playing a fourth season on his rookie contract, Adams cashed in last year. The Seahawks’ decision to trade for the acclaimed blitzer and give him a then-market-topping extension has backfired to this point.

Adams’ $17.5MM extension last summer topped the safety market by more than $2MM (AAV-wise). Although Minkah Fitzpatrick and Derwin James have since surpassed that deal, Adams is the highest-paid defender on Seattle’s defense and — post-Russell Wilson and Bobby Wagner — the second-highest-paid player on the team. Seattle re-signed Quandre Diggs this offseason, giving the franchise two of the league’s top-10 highest-paid safeties. Diggs will have to go it alone for the season’s remainder.

While Adams is not regarded as a high-quality cover man, the Seahawks put him to work as a hybrid player over his first two seasons. After a 6.5-sack 2019 season with the Jets — an All-Pro campaign — Adams set a safety record with 9.5 sacks in his first Seahawks season, helping the team to the playoffs. Adams did not record a sack in 2021. Injuries have dogged him for much of his Pacific Northwest stay, however. Two shoulder surgeries have occurred since Adams arrived in Seattle, and he underwent multiple finger operations this offseason. The LSU alum’s finger issues have left him no longer able to make a fist with his left hand, and Adams said his shoulder trouble had him playing “with one arm for damn near two years.”