One of a handful of Bears front-seven departures this offseason, Eddie Goldman found a new home Wednesday. The Falcons signed the veteran defensive tackle to a one-year contract. The team announced this transaction and the waiving of safety Brad Hawkins. 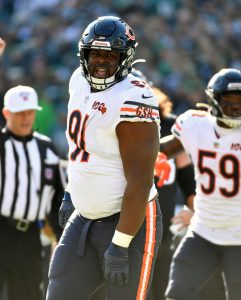 A six-year veteran, Goldman started for nearly his entire Chicago tenure. The Falcons brought in ex-Bears GM Ryan Pace this offseason, making this a reunion for Goldman. Pace was in his first months as Bears GM when the team drafted Goldman in the 2015 second round. The veteran executive authorized a four-year, $42MM Goldman extension three years later and may well be behind the Falcons giving him another opportunity.

The Bears released their longtime nose tackle in March. That move came during a stretch in which the team parted ways with front-seven veterans Khalil Mack, Akiem Hicks and Danny Trevathan. Goldman, 28, joins Hicks to have found a new home in free agency. Hicks signed with the Buccaneers last month.

While not on the Pro Bowl level like Mack and Hicks, Goldman contributed to the Bears fielding top-tier defenses — including 2018’s No. 1-ranked unit. Pro Football Focus ranked Goldman as a top-15 interior D-lineman in 2018 and had him as a top-40 player here in 2019. The accomplished run-stopper opted out of the 2020 season, and PFF graded him near the bottom at the position last season. With the Falcons, the Florida State alum should receive another chance at substantial playing time.

Atlanta will pair Goldman and longtime cornerstone Grady Jarrett, who signed an extension this offseason. The team also has some draft capital invested in its D-line, with ex-second-rounder Marlon Davidson going into his third season. Anthony Rush had slotted as Atlanta’s top nose tackle this offseason. Goldman (73 starts) figures to push the incumbent.

The Falcons announced the signing of 13 undrafted free agents:

“We keep talking about our scouting staff and our coaches and all the work that goes into it, and they really grind through this free agency process as well,” GM Terry Fontenot said right after the draft (via Scott Bair of the team’s website). “So I know we are going to continue to add some good football players. We’re excited.

“Once they get here, it doesn’t matter how they got here. It’s competition at every position.”

Derrick Tangelo got some significant money from the organization. Aaron Wilson of ProFootballNetwork.com tweets that the defensive lineman got $55K guaranteed, including a $5K signing bonus. The rookie had 6.5 sacks and 18 tackles for loss in five seasons split between Duke and Penn State.