As it turns out, the Lions signed two 2020 draftees yesterday. In addition to getting fifth-round wide receiver Quintez Cephus under contract, the club inked its other fifth-round choice, New Mexico State running back Jason Huntley. Huntley posted a picture of himself signing his rookie deal on Instagram. 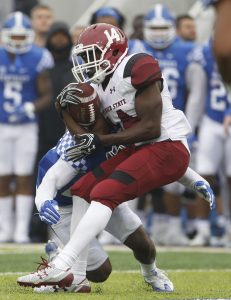 Huntley may struggle for playing time early in his Lions tenure, as Detroit is also rostering Kerryon Johnson and used a second-round choice this season on talented Georgia back D’Andre Swift, whom some considered to be the best RB in the class. On the other hand, Johnson has dealt with injuries over the first two years of his pro career, and another ailment could push Huntley up the depth chart. In the meantime, he will be competing with the likes of Ty Johnson and Bo Scarbrough for reps as the club’s RB3. He could also push Jamal Agnew for the kickoff returner job.

Huntley exploded in his final collegiate season, racking up 1,090 yards on 154 totes, good for a whopping 7.1 YPC average. He is also a capable receiver out of the backfield, with plenty of speed to burn.

With that, the Lions are just missing the bookends of their 2020 class. No. 3 overall pick Jeffrey Okudah and seventh-round choice Jason Cornell are the only two of Detroit’s nine drafted rookies who have yet to sign. Here’s the full list, courtesy of PFR’s Tracker: