Brandon Copeland‘s free agency didn’t last long. Just a couple days after being released by the Falcons the veteran linebacker has re-signed with Atlanta, the team announced Monday.

It seems his release on Saturday was just a procedural move to ensure his salary didn’t become guaranteed. Vested veterans have their contracts guaranteed for the year when they’re on a Week 1 roster. Originally an UDFA out of Penn back in 2013, it took Copeland a few years to find his footing in the league. He eventually broke out in 2018 with the Jets.

He started 10 games for New York that year, racking up five sacks and 14 QB hits while operating as an outside linebacker. The Ivy League grad again played a sizable role with the Jets in 2019, then signed with the Patriots last year. A torn pec limited him to six games, but he started four of them for New England.

He then landed with the Falcons back in March. Atlanta got drubbed by the Eagles in their season opener on Sunday, so they could use all the help they can get.

The Falcons made an interesting Week 1 decision. They are releasing veteran linebacker Brandon Copeland, per Sports Talk 790’s Aaron Wilson (on Twitter). 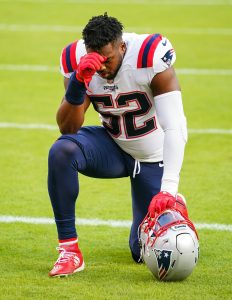 A former Jets and Patriots starter, Copeland signed with the Falcons during the first week of free agency. The Falcons filled Copeland’s roster spot by promoting linebacker James Vaughters from their practice squad.

Atlanta added Copeland, 30, on a league-minimum deal. This cut will prevent Copeland’s $990K base salary from becoming guaranteed. Vested veterans on Week 1 rosters have their 2021 salaries guaranteed. While Copeland could end up back with the Falcons on a team-friendlier pact or on a practice squad deal, he is in free agency for the time being.

The ex-UDFA recorded five sacks and 14 QB hits for the Jets in 2018, working as an edge player for a team long weakened at that skill, but saw an injury stall his career. A torn pec ended Copeland’s Patriots run in October 2020. The Pats used Copeland as a four-game starter last season. Copeland appeared on Atlanta’s injury report this week with a hamstring ailment but got in a full practice Friday.

The Falcons have agreed to a one-year deal with Brandon Copeland (Twitter link via ESPN.com’s Adam Schefter). The former Patriots linebacker missed much of last season with a torn pec, but he’s closing in on a complete recovery.

Copeland, an ex-Jets and Lions contributor, also drew interest from the Giants. It’s not clear whether the incumbent Pats tried to bring him back or not. Before the injury, Copeland was ticketed for a major role as Dont’a Hightower’s fill-in. He wound up playing in just six games with four starts, but Pro Football Focus gave him strong grades in that limited sample.

His 2018 Jets season marked his only year as a starter. In 16 games, he notched five sacks and 14 quarterback hits. So far, that’s his only season with more than two sacks.

Terms of the deal are not yet known, but this could prove to be a strong value signing for Atlanta. At least, that’s the hope, given how quiet the Falcons’ week has been.

Despite suffering a torn pectoral muscle last season, Brandon Copeland has generated some interest as a free agent. The veteran linebacker plans to meet with the Falcons and Giants, per Sirius XM Radio’s Adam Caplan and ESPN.com’s Michael Rothstein (Twitter links).

A former Lions and Jets contributor, Copeland signed with the Patriots last year. The Pats, who both lost multiple key linebackers in free agency and saw Dont’a Hightower opt out of last season, used Copeland as a starter in four games. Pro Football Focus viewed the five-year vet’s abbreviated work well, slotting him near the top of its 2020 linebacker hierarchy.

The Lions used Copeland as a backup from 2016-17, but he broke into the 2018 Jets’ starting lineup. Copeland worked as a pass rusher that season, recording five sacks and 14 quarterback hits. That marked the veteran linebacker’s only season with more than two sacks. The 2021 season will be Copeland’s age-30 slate.