One of New England’s longest-tenured players is done for the season. ESPN’s Mike Reiss reports (via Twitter) that long snapper Joe Cardona has a torn tendon in his foot and won’t play again this season. 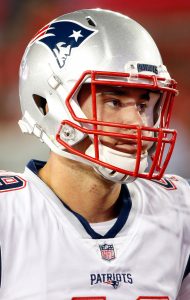 The 30-year-old suffered a partial tear in his foot earlier this month, but he still managed to play through the injury in Week 15. It’s uncertain if Cardona made the injury worse by playing, but either way, he won’t be back on the field until the 2023 campaign. Reiss notes that the veteran is expected to be fully recovered by the spring.

Cardona made a name for himself when he became the fourth long snapper in NFL history to be drafted, with the Patriots selecting the Navy product in the fifth round of the 2015 draft. Cardona hasn’t missed a game since joining the organization, appearing in all of New England’s 127 regular season games and 13 playoff games over that stretch. During his time with New England, Cardona has earned a pair of Super Bowl rings. He was also named to the organization’s ‘All-Dynasty Team’ in 2020. Cardona inked a four-year extension with the Patriots in 2018 that is set to expire following this season.

Elsewhere on the injury front, receiver DeVante Parker and cornerback Jalen Mills will both be out again for the Patriots this weekend when they take on the Bengals. Running back Damien Harris, cornerback Jack Jones, and receivers Tyquan Thornton and Jakobi Meyers are all questionable for this weekend.

The Patriots are reportedly open to trading OT Isaiah Wynn, who has been moved from left tackle to right tackle this year after lining up exclusively on the blindside over his first few seasons in the NFL (aside from a 2020 cameo at LG and some training camp work at RT as a rookie). As expected, however, outside interest in the former first-rounder is limited at this point, as Jeff Howe of The Athletic tweets.

Although Wynn did play in 16 regular season contests in 2021, he comes with an extensive injury history. He is also tethered to a $10.4MM salary for 2022 since New England exercised the fifth-year option on his rookie deal, and at least some teams consider him a tackle-guard “tweener.” All of that suggests that the Pats — who must also consider the injury history of LT Trent Brown and the underwhelming training camp performances of backups Justin Herron and Yodny Cajuste — may not fetch a high enough return to pull the trigger.

4:17pm: The second-round pick is not likely to play again until around October. The expected recovery timetable for Thornton is believed to be around eight weeks, Mike Giardi of NFL.com tweets.

12:04pm: Tyquan Thornton is going to miss some time. The Patriots rookie wideout suffered a collarbone injury that will probably force him to miss some regular-season games, according to NFL.com’s Ian Rapoport (on Twitter). 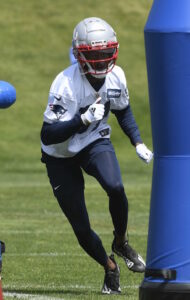 Thornton suffered the injury during last night’s preseason contest against the Panthers. While this shoulder ailment is expected to delay his regular-season debut, Rapoport notes that the injury isn’t expected to end the wideout’s season.

While the Patriots certainly don’t want to see any of their players injured, this news could help provide some clarity to a crowded receivers room. Thornton appeared to be one of the only WRs to be guaranteed a spot on next year’s roster, along with Jakobi Meyers and offseason acquisition DeVante Parker. Kendrick Bourne was curiously absent from last night’s game, and while Bill Belichick naturally refused to provide an explanation, it was hinted that the WR wasn’t sidelined with an injury. Meanwhile, rumors have swirled surrounding the future of Nelson Agholor in New England.

Both Bourne and Agholor would probably secure their spots on the roster if Thornton is forced to miss any time. Although the Patriots would have to carry Thornton past the preseason in order to place him on short-term IR, a stint on the injured list could also open up a spot or two for Tre Nixon, Kristian Wilkerson, and Lil’Jordan Humphrey.

Whenever Thornton returns, he should provide Mac Jones with a much-needed vertical threat. While pundits thought New England reached a bit when they selected the Baylor product in the second round, he still graded as one of the fastest players in the draft. Thornton finished his college career with 948 yards and 10 touchdowns during the 2021 campaign.

When the Patriots chose N’Keal Harry during the 2019 draft, it was the first time the organization had selected a first-round WR during Bill Belichick‘s reign. Fast forward three years, and the Patriots pawned off Harry for a seventh-round selection. 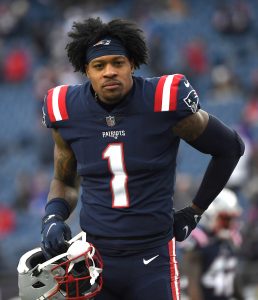 Doug Kyed of Pro Football Focus recently explored Harry’s struggles in New England and what ultimately led to his trade to the Bears. This naturally led to another (and persistent) story of Belichick’s inability to find production from his receiver draft picks. Since Belichick took over in 2000, the Patriots have used 19 draft picks on the position. As Kyed notes, only three of those players (Deion Branch, David Givens, and Julian Edelman) started more than 20 games in the NFL. About half of those picks were selected in the fourth round or earlier, and many (like Harry) struggled to ever carve out a role in New England’s offense.

As sources told Kyed, part of this is on the Patriots’ strict offense and their unwillingness to tolerate rookie mistakes:

Now, Harry’s inability to stick in New England can’t be entirely put on the organization; sources also attributed Harry’s failures to a lack of maturity, work ethic, and commitment. Still, looking at Belichick’s list of WR draft picks is a bit damning:

Branch and Edelman were both Super Bowl MVPs. Givens was one of Tom Brady‘s preferred targets for a bit, and Matthew Slater eventually became a ST ace. Otherwise, the team’s best picks at the position are probably Braxton Berrios and Brandon Tate, who both experienced NFL success outside of New England, and/or Malcolm Mitchell and Aaron Dobson, who combined for 1,099 career receiving yards.

Of course, even outside of Belichick’s Super Bowl rings, it’s hard to be too critical. While you could attribute much of the Patriots’ offensive success to Brady, it was still Belichick who brought in a revolving door of receivers via trade (highlighted by Randy Moss and Wes Welker) and free agency (including the likes of Danny Amendola and Brandon Lloyd). He also hit on his tight ends (led by Rob Gronkowski) and pass-catching backs (led by James White). Belichick even got some production from UDFAs, most recently Jakobi Meyers. Sure, he burned plenty of draft picks at the position, but it wasn’t like he completely compromised Brady’s receiving corps.

Brady and offensive coordinator Josh McDaniels are now out of the picture. It will be intersting to see how a young receiver like second-round rookie Tyquan Thornton will fare alongside quarterback Mac Jones and a revamped offensive coaching staff guided by former defensive coordinator Matt Patricia and former special teams coordinator Joe Judge. As Kyed notes, Belichick has mentioned a desire to “streamline” the offense heading into the 2022 campaign, and that potential change in mentality could have an impact on young receivers going forward.

Second- and third-day draftees came to terms with the Patriots on their rookie contracts Thursday. After signing Tyquan Thornton and Bailey Zappe to their four-year pacts, the team has completed its draft deals for 2022. 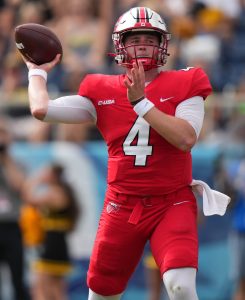 A Baylor-produced wide receiver with a 4.28-second 40-yard dash time on his pre-draft resume, Thornton enticed the Patriots to trade up four spots — from No. 54 to No. 50 — to acquire him. The Bill Belichick-era Pats have notoriously struggled to identify college receiver talent, at least with high picks, and recent Baylor wideouts to come through the league have delivered inconsistent pro careers. The Pats will aim to buck both trends here.

Baylor has sent the likes of Denzel Mims, Corey Coleman, Josh Gordon and Kendall Wright into the league as first- or second-round picks (Gordon was a Round 2 supplemental choice). Some of those players have enjoyed moments or short stretches of production, but the Big 12 program has not seen its top pass-catching cogs enjoy extended runs as starters. New England has swung and missed on highly drafted wideouts N’Keal Harry, Aaron Dobson and Chad Jackson over the past 16 years — the only first- or second-round wideouts the team has chosen — but obviously did quite well with late-rounders Julian Edelman and Matthew Slater. UDFA Jakobi Meyers has played well through three seasons, too, earning a second-round RFA tender from the team this offseason.

Although Thornton broke through as a senior by catching 62 passes for 948 yards and 10 touchdowns, he surpassed 17 yards per reception during both his freshman and sophomore years. In addition to Thornton, the Pats added DeVante Parker via trade and Lil’Jordan Humphrey late in the offseason. That duo joins the Meyers-Kendrick Bourne–Nelson Agholor trio. Harry remains on the roster but has been in trade rumors for multiple years now.

Zappe is coming off a historically productive season in his lone fall at a Division I-FBS program. The transfer passer broke Joe Burrow‘s recent FBS record by throwing 62 touchdown passes (compared to 11 interceptions). Zappe, a Houston Baptist import, also tallied 5,967 passing yards. Zappe played in a pass-crazed system and will attempt to transition to the pros, attempting to develop behind Mac Jones and Brian Hoyer.