Notable Incentives Still In Play For 2022

As we head into Week 17, a number of players still have key incentives available. Here is a handful of the notable escalators in reach — many involving Smiths — courtesy of SI.com’s Albert Breer.

Injuries continue to plague wide receiver Mike Williams and the Chargers this 2022 season. After making his way back from a three-week absence, during which he missed two games, Williams left the team’s loss to the Chiefs last week after only six offensive snaps. The setback that took him out early in last week’s game will now officially keep him out for another game as Los Angeles has ruled him out for this week’s matchup against the Cardinals.

In Williams’ absence, the team will likely go with the same wide receiver mixture they did when he left last week. Keenan Allen will lead the receiving corps alongside Josh Palmer and DeAndre Carter while also getting some reserve snaps from Michael Bandy.

It was originally expected that Williams would miss four games, after the initial diagnosis of his high ankle sprain. Counting last week as an absence, this week will be his fourth missed game, hopefully giving him the rest he needs to help the Chargers make a playoff push.

Here are a few other injury updates from around the league, starting with another injured wide receiver in the AFC West:

The Chiefs will be shorthanded at wideout when they take the field Sunday night in Los Angeles. JuJu Smith-Schuster has been ruled out for Week 11, per a team announcement. 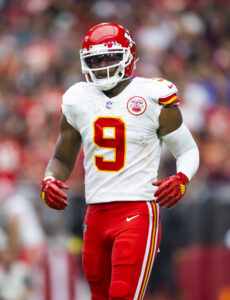 Smith-Schuster suffered a concussion last week, and has been unable to clear the league’s protocol in time to suit up against the Chargers. This will mark the first missed contest of the season for the 25-year-old, putting his successful debut season in Kanas City on hold.

Long connected to the Chiefs, Smith-Schuster made the move from Pittsburgh to Kansas City this offseason. He inked a modest one-year, $3.76MM deal in March, but it has worked out very well to date. The former second-rounder has 615 yards on the year, which leads all wideouts on the team and ranks second only to tight end Travis Kelce. He has averaged 13.4 yards per catch – the second-highest figure of his career and a marked improvement over his past two seasons with the Steelers – while scoring a pair of touchdowns.

The news is especially troublesome for the Chiefs since Mecole Hardman was placed on IR yesterday due to an abdominal injury. Kansas City leads the league with an average of 326 passing yards per game, but they will now turn to speedsters Marquez Valdes-Scantling and Kadarius Toney as their focal points on the perimeter. The latter, a recent trade acquisition from the Giants, scored his first career touchdown last week in just his second contest as a Chief.

Like Hardman, Smith-Schuster’s absence also comes with free agency looming this spring. The latter should miss less time given the nature of their respective injuries, but the team’s primetime game against the Chargers could now be more complicated from an offensive standpoint. That, in turn, will add further intrigue to what will already be a key game affecting the top of the AFC West.

As teams around the NFL attempt to navigate the salary cap while putting together the rosters with which they will open the season, a couple of players have agreed to rework their current contracts in order to give their teams a bit more breathing room. Here are a few notable examples:

The Chiefs chased JuJu Smith-Schuster in consecutive offseasons. They attempted to sign him in 2021, joining the Ravens in that regard. While Smith-Schuster re-signed with the Steelers last year, he said the Chiefs finished second. He landed in Kansas City this year on a one-year, $3.25MM contract. After a lost year in his Pittsburgh finale, Smith-Schuster is expected to play a more versatile role in Kansas City.

“This is what I’ve been waiting to do. Everyone has to know everybody’s position. You have to know the outside, inside. You could play anywhere,” Smith-Schuster said, via NBC Sports’ Peter King, of his role in the Chiefs’ offense. “To be on so many personnel groups where we got so many great receivers who could play inside and outside, I love it. That’s what I’ve been wanting to do, to be used in so many different ways.”

The Steelers used Smith-Schuster in the slot on 78.8% of his snaps from 2020-21, per Pro Football Focus. While the veteran inside pass catcher should not be considered a pure Tyreek Hill replacement, he will be part of Kansas City’s collective post-Hill solution. Smith-Schuster joins Marquez Valdes-Scantling, second-round pick Skyy Moore and holdover Mecole Hardman in that group.

Here is more from the wide receiver scene across the league:

After long being linked to one another, a deal has reportedly been made between the Chiefs and wideout JuJu Smith-Schuster. According to ESPN’s Field Yates, he is signing a one-year, $10.75MM contract (Twitter link). NFL Network’s Mike Garafolo adds that the deal carries a base value of $3MM, with the remainder being available through incentives (Twitter link).

The 25-year-old has spent his entire five-year career with the Steelers. A second round pick, he established himself as the ultimate compliment to Antonio Brown during his rookie season, posting 58 catches for 917 yards and seven touchdowns. He took a step further the following campaign, totalling 111 receptions for 1,426 yards and another seven scores. That production earned him a Pro Bowl nod.

He failed to match those totals in the proceeding three years, however. Taking on an increased role in Brown’s absence, he has still put up noteworthy totals, but has generated a reputation as being best suited to a secondary workload. He played in just five games in 2021, totalling 15 catches.

On Kansas City, he certainly won’t need to be the focal point of the offense. The team already has All-Pro pass catchers in Travis Kelce and Tyreek Hill, but they have made it clear adding a third piece to compliment them was a priority. The Chiefs were named as a serious contender for Smith-Schuster last offseason, who ultimately chose to remain in the Steel City on a one-year pact to play his way into a new, more lucrative deal.

While this contract is also only one year in length, it is still a raise compared to the $8MM he earned in 2021. With the likes of Allen Robinson, Davante Adams and Chris Godwin off the market, the USC product was one of the top remaining options at the position. Now, he will join a team long interested in acquiring him, and which is likely to remain a Super Bowl contender.

Going into the last year of his contract, Patriots punter Jake Bailey was set to earn a base salary of $925,000 for the 2022 NFL season. Due to a proven performance bonus that was triggered when Bailey was selected to the 2020 Pro Bowl, Bailey is on track to be the NFL’s highest-paid punter with a 2022 salary of $3.98MM, according to Mike Reiss of ESPN.

A knee injury limited Bailey in the 2021 season which saw him struggle to live up to his expected salary. It’s now assumed that the Patriots will begin working towards a contract extension to lessen the cap hit Bailey is posed to hold. In a normal situation, the Patriots might want to see another season of success out of Bailey after a down 2021, but Bailey’s raise puts a little pressure on New England to work out a deal sooner rather than later.

Here are a few more notes from around the AFC, starting with a note from the Steel City:

After considering an offer from the Chiefs last offseason, wideout JuJu Smith-Schuster will give Kansas City another long look this time around. According to Aaron Wilson of ProFootballNetwork.com, the Steelers wideout “is interested in potentially joining the Chiefs again.”

According to Wilson, the JuJu/Chiefs connection is “no secret in NFL circles,” and many league sources believe the impending FA is hoping to join Kansas City.

Smith-Schuster hasn’t come close to matching his Pro Bowl-worthy 2018 campaign. Following a forgettable 2019 campaign, JuJu somewhat bounced back in 2020, finishing with 97 catches and a career-high nine touchdowns. Still, the former second-round pick had to settle for a one-year, $8MM deal from Pittsburgh for the 2021 campaign.

The 25-year-old struggled to stay on the field in 2021 thanks to early-season shoulder surgery. He ultimately saw time in only five games, hauling in 15 receptions for 129 yards.