The Chiefs didn’t have a first-round pick in this past draft because of the Orlando Brown Jr. trade, so their first pick came at 58th overall. Kansas City used that pick on linebacker Nick Bolton, who is now officially a Chief. 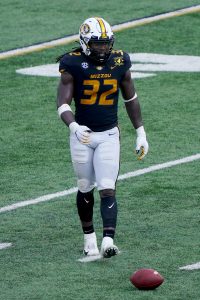 Bolton has agreed to terms on his rookie contract, Field Yates of ESPN.com tweets. The Missouri product only turned 21 in March, and has been a first-team All-SEC selection in each of the past two seasons. This past year he racked up 95 tackles, eight for a loss, two sacks, and five passes defended in only 10 games.

In addition to offensive line the Chiefs have made upgrading their linebacking unit a priority, as they also just signed Kamalei Correa. Bolton projects as a potential day one starter. Obviously, he won’t have to be moving very far to start his pro career and will be staying in-state.