The Bengals lost a key divisional game last night, along with an integral member of their defense. It was feared after the contest that cornerback Chidobe Awuzie had suffered an ACL tear; as confirmed (on Twitter) by Kelsey Conway of the Cincinnati Enquirer, that is indeed the case. 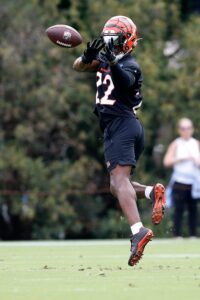 The news means that Awuzie will be sidelined for the remainder of the season, and marks a major blow to the AFC champions. He played a key role in the team’s secondary last season, his first in Cincinnati after signing a three-year deal worth over $21MM. That marked the end of his Cowboys tenure, during which he established himself as a full-time starter.

During the Bengals’ run to the divisional title, and, ultimately, the Super Bowl, the 27-year-old established himself as the team’s No. 1 corner. He set new career highs in interceptions (two) and pass breakups (14), leading to high expectations in 2022. The former second-rounder had played in every game so far this season, notching 35 tackles and one forced fumble. He also continued his stellar play in terms of coverage statistics.

Without Awuzie, the Bengals’ corner depth will severely tested. Veteran Eli Apple and rookie Cam Taylor-Britt had been in a competition for a starting role, but both will likely be leaned upon to play significant snaps going forward. Tre Flowers could also see an uptick in usage as a result of the injury, after playing primarily on special teams this season.

Overall, the news is not encouraging considering Cincinnati only ranked mid-pack in terms of pass defense with Awuzie in the fold. The Bengals are surrendering an average of over 210 yards per game (15th in the league), a figure which is now in jeopardy of increasing significantly over the remainder of the season. The defense as a whole has been average in most categories, a troubling sign given the inconsistencies the offense has dealt with so far.

Still, the team sits at 4-4 midway through the year, so a playoff berth in an AFC featuring few true heavyweights will be attainable. Returning to the postseason, and replicating last year’s success, however, will now be more difficult.

The Bengals have placed Riley Reiff on the injured reserve list, per a club announcement. In a related move, they’ve also placed cornerback Chidobe Awuzie on the Reserve/COVID-19 list.

Reiff, who just turned 33, has started in all 12 of his games for the Bengals this season. While he’s never made a Pro Bowl or All-Pro team, he’s been a solid protector for the Bengals, just as he has been throughout his career. He didn’t live up to his five-year, $58.75MM contract with the Vikings, but the Bengals were happy to pick him up this past spring. As of this writing, Pro Football Focus has him ranked as the 50th best tackle in the NFL out of 82 qualified players.

For now, Jonah Williams (PFF’s No. 22 ranked OT) will play with Isaiah Prince on the opposite side. The nature of the injury is not yet clear, but Reiff could potentially return after three weeks on the sidelines.

With a record of 7-6, the Bengals still have a 30% chance of making the playoffs and an 18% chance of winning the AFC North, per Five Thirty Eight. They’ll look to increase those odds this week — sans Reiff — with a win over the Broncos.

The Bengals have agreed to sign Chidobe Awuzie to a three-year deal (Twitter link via NFL.com’s Mike Garafolo). Awuzie missed half of the Cowboys’ season due to injury, but the Bengals believe in his potential.

This agreement is worth $21.75MM over three years, according to NFL.com’s Tom Pelissero (on Twitter). By virtue of Pro Bowl-based incentives, it can max out at $22.5MM.

Awuzie finished 2020 with 38 stops, five passes defensed, and one interception. All in all, he has 213 tackles, four interceptions, 37 pass deflections, and two forced fumbles across four pro seasons. He’s been a consistent starter for the Cowboys, though fans have been mostly lukewarm on him since he was selected in the second round of the 2017 draft.

Awuzie isn’t great in man-to-man coverage, but he’s much stronger in zone coverage. Utilized properly, he could be a solid contributor, though he definitely won’t be able to replace the production of William Jackson. Jackson, who has started at least 13 games in each of the past three seasons, is a free agent and could score a top-of-the-market deal.