The 49ers may be facing long-term questions at the quarterback position, but a key member of their special teams unit will remain in the fold for the foreseeable future. The team announced on Friday that they have extended punter Mitch Wishnowsky on a four-year deal. Ian Rapoport of NFL Network tweets that the contract will pay him just under $3MM annually and has a maximum value of $13MM. 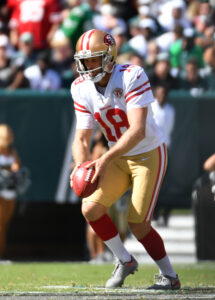 A fourth-rounder in 2019, Wishnowsky has one year remaining on his rookie contract. This new pact will not only represent a sizable increase in compensation relative to his 2022 pay, it could make him the second highest-paid punter in the NFL if it reaches the $3.25MM-per-year mark, behind only Seattle’s Michael Dickson.

The 30-year-old Australian has yet to miss a game so far in his career, and has been consistent across his three seasons in the league. His busiest campaign came in 2020, when he punted 66 times for an average of 46.9 yards, his personal watermark in that regard to date. In addition to punting, Wishnowsky has also handled kickoff duties, doing so 219 times in the regular season.

The Utah alum will now be on the books through the 2026 season, giving San Francisco some long-term stability at one of their specialist positions. Both kicker Robbie Gould and long snapper Taybor Pepper are set to hit free agency at the end of the year; the former’s age (40) in particular could leave his future in doubt. The latter, meanwhile, has just begun his third season in the Bay Area after making appearances with the Packers and Dolphins previously.

In what should be far better conditions than he had to face during the 49ers’ Week 1 loss in Chicago, Wishnowsky will look to help get his team back on track when they host the Seahawks on Sunday knowing that his long-term future is secure.

The first 2019 draft pick signing commenced Tuesday. Only 253 to go.