The Bengals are set to retain the top two names on their quarterback depth chart. The team is re-signing backup  Brandon Allen on a one-year contract, according to NFL Network’s Tom Pelissero (Twitter link). 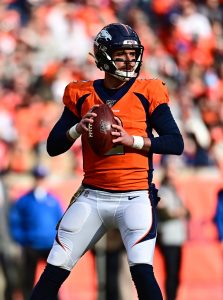 Pelissero notes that Allen “was Cincinnati’s top choice” to serve as Joe Burrow‘s No. 2, so the move shouldn’t come as a surprise. The 29-year-old has been with the Bengals for the past two seasons, after he spent one year in Denver. He’s made a total of nine starts in his career, going 2-7 while completing 56.2% of his passes. The former sixth round pick has thrown 10 touchdowns and six interceptions.

In his time in Cincinnati, the numbers look slightly better. Allen’s completion percentage sits at 60.8% with the Bengals, and his passer rating is 82. While he doesn’t seem destined to find a starting role in the NFL, the former Razorback has clearly pleased the Bengals enough for him to be their preference as a backup.

Before the deal was announced, the Bengals still had just under $13MM in cap space to work with. That should leave them the flexibility to make at least one more noteworthy signing to augment the roster of last season’s AFC-winning team. In any event, they will at least carry over the same quarterbacks that they had that season into 2022.

Brandon Allen is sticking around Cincinnati. NFL.com’s Tom Pelissero reports (via Twitter) that the quarterback is re-signing with the Bengals. It’ll be a one-year pact for the 28-year-old.

As Tyler Dragon of the Cincinnati Enquirer tweets, the Bengals were pleased with Allen’s performance both on and off the field last season, especially following the season-ending injury to starter Joe Burrow. Allen started five of Cincy’s final six games last season, and while the Bengals went only 1-4 in those contests, the quarterback managed to complete 63.4-percent of his passes for 925 yards, five touchdowns, and four interceptions. Allen initially signed a deal with the Bengals last offseason, and he landed on the practice squad after being cut at the end of the preseason.

The former sixth-round pick out of Arkansas had stints with the Jaguars and Rams before landing with the Broncos in 2019. He started three games that season, completing 46.4-percent of his passes for 515 yards, three touchdowns, and two picks.

Allen will likely serve as Burrow’s primary backup in 2021. The team also has former fourth-rounder Ryan Finley under contract.

Brandon Allen is expected to have a new team soon. The journeyman backup quarterback will take a physical and a COVID-19 test for the Bengals this weekend, per Tom Pelissero of NFL.com (on Twitter).

Assuming those check out, Allen is expected to sign with the team, Pelissero adds. Although Allen spent the 2019 season with the Broncos, seeing his first NFL action, he has a history with Bengals HC Zac Taylor. He spent nearly two seasons as a Rams backup. Taylor was with Los Angeles from 2017-18, serving as the Rams’ QBs coach in 2018.

Allen would join 2019 draftee Ryan Finley behind No. 1 overall pick Joe Burrow, who will be Cincinnati’s starter this season. The Bengals released Andy Dalton earlier this year.

Despite being a 2016 draftee (by the Jaguars in Round 6), Allen did not make his regular-season debut until last season. The Broncos called upon their waiver claim to start in November, with the former Arkansas passer serving as a bridge between injured passers Joe Flacco and Drew Lock. Allen won his first game, throwing two touchdown passes against the Browns, and threw for 240 yards in a narrow loss in Minnesota the following week. For the season, however, Allen completed just 46% of his passes.

Broncos’ Joe Flacco Out For Week 9

The Broncos’ struggling offense will be in for a bigger test next week. Joe Flacco suffered a neck injury and will miss the team’s Week 9 game against the Browns, Vic Fangio said (via NFL.com’s Tom Pelissero, on Twitter). 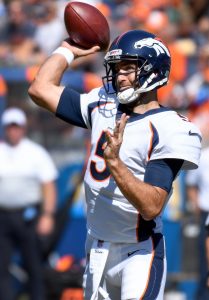 That will move backup Brandon Allen into Denver’s starting lineup. Acquired just before the start of the regular season, Allen has never taken a regular-season snap. Drew Lock is eligible to come off IR this week, but Allen will get the call.

Flacco’s injury could mean a multi-week absence, per Ian Rapoport of NFL.com (on Twitter). Fangio said IR is a possibility for Denver’s starter; Flacco going on IR would effectively end his season. Flacco is dealing with a herniated disk, the team announced. This puts the remainder of the 12th-year passer’s season in jeopardy.

This injury is not expected to require surgery, per 9News’ Mike Klis, who adds Lock will either be brought off IR this week or practice squad passer Brett Rypien will be promoted (Twitter links). The Broncos’ healthy quarterback contingent collectively has zero NFL pass attempts.

Flacco missed time in 2015 and 2018 due to injuries, and the longtime Raven dealt with back discomfort in 2017. The Broncos sent a fourth-round pick to the Ravens in exchange for Flacco. They also restructured his deal in September, tethering the 34-year-old quarterback to the 2020 cap sheet. Previously, Flacco had no guaranteed money on his deal post-2019. Now, $13.6MM in dead-money charges would come if the veteran is cut next year.

Flacco was critical of the Broncos’ play-calling in their loss to the Colts on Sunday and has them at 2-6 — Denver’s worst record after eight games since 2010. Allen was a sixth-round Jaguars pick out of Arkansas in 2016. He spent parts of the past two seasons with the Rams, before coming to Denver as a waiver claim. 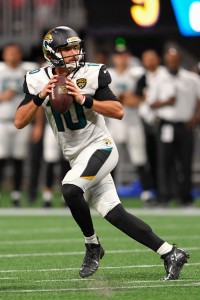 Allen spent the year on the Rams’ practice squad but was with the club for the bulk of the 2017 season on their main roster. Like many QBs on the fringe, Allen has yet to throw a pass in a real NFL game.

Depending on how the rest of the offseason shakes out, Allen may have an opportunity to stick on the 53-man roster. As of this writing, he’s the only other QB on the roster outside of starter Jared Goff. Sean Mannion, last year’s No. 2 QB, will be a free agent in March.