A Joey Bosa ramp-up period does not seem to be in the cards for the Chargers. Despite the perennial Pro Bowl pass rusher missing 12 games and only being designated for return Thursday, the Bolts are preparing to activate him from IR for Week 17.

Brandon Staley said the plan is for Bosa to play this week against the Rams, per NFL.com’s Bridget Condon (on Twitter). Bosa has been out since Week 3 because of a groin injury that required surgery. 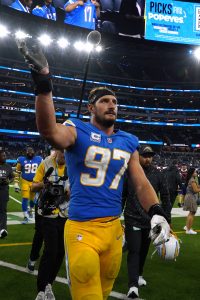 The seventh-year defender said this week he has dealt with this issue for a while and indicated upon his return to practice he felt better than he has in years. Bosa has dealt with a number of injuries since the Bolts drafted him third overall in 2016, but this year’s absence has been the longest. The Chargers have managed to recover from their injury-affected swoon, however, and are playoff-bound for the first time since 2018 — Bosa’s previous year with a major injury.

Bosa missed four games as a rookie in 2016 (hamstring), was shut down for nine during the 2018 season (foot) and missed four more contests in 2020 (two concussions). Despite being often sidetracked by injuries, the former Ohio State star has four double-digit sack seasons on his resume. His return to anchor Los Angeles’ pass rush will certainly enhance the Bolts’ chances of being a major factor in the playoffs.

The Chargers, who only had the chance to play Bosa and Khalil Mack together for two full games, have picked up the pace in quarterback pressure recently. They sacked Nick Foles seven times Monday night and recorded four in a last-second win over the Titans in Week 15. Mack has a team-high eight sacks, making the Pro Bowl for a seventh time, while both Morgan Fox and Drue Tranquill hit the five-sack mark in Indianapolis. The supporting-casters have 11.5 combined sacks this season, with Tranquill putting together an interesting stat line that includes five sacks and 129 tackles.

Much of the injury trouble the Chargers have encountered is in the rear-view mirror. Justin Herbert, who suffered a rib injury in Week 2, has played better over the past several weeks. Both Keenan Allen and Mike Williams have returned from their earlier health issues as well. The Chargers have not opened Rashawn Slater‘s practice window yet, but their left tackle returning from an early-season biceps injury remains in play.

Derwin James had missed time but returned for the Chargers-Colts tilt. However, he was ejected for leading with his helmet on a first-half tackle. Both James and the player he tackled, Indianapolis wideout Ashton Dulin, sustained concussions on the play. Both are out for Week 17. 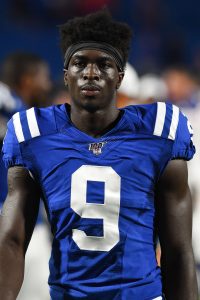 Ashton Dulin will be out for at least the next four games. The Colts announced that they’ve placed the wide receiver/special teams ace on injured reserve. To fill the open roster spot, the team signed defensive tackle Chris Williams to the active roster from the practice squad.

Dulin suffered a foot injury during Thursday’s overtime win over the Broncos. The 25-year-old made a name for himself in 2021 after earning a second-team All-Pro nod for his special teams prowess, with Dulin’s 17 special teams tackles ranking second in the NFL. Besides his spot as a gunner, he also started to see a bigger role on offense in 2021, finishing with 13 catches for 173 yards and two scores. Dulin still had a significant role on ST this season, but he continued to be used on offense. Through five games (one start), he’s hauled in 12 catches for 168 yards.

The Colts have plenty of options to replace Dulin on offense, with Alec Pierce, Mike Strachan and Parris Campbell among the candidates to soak up the open snaps. However, as Nate Atkins of the Indianapolis Star points out, the team will surely miss him on ST; the team has already shuffled through kickers, and both punter Rigoberto Sanchez and fellow ST ace Armani Watts are done for the year.

Williams joined the Colts as an undrafted free agent out of Wagner in 2020. He collected four tackles in eight games for Indy last season, and he made his 2022 debut last week against the Broncos.

The Colts have elevated wide receiver Ashton Dulin from the practice squad, per a club announcement. The move comes after a week full of missed practices for T.Y. Hilton.

Hilton continues to rebound from a quad injury that may keep him from facing the Raiders on Sunday. Enter Dulin, who will provide depth behind Zach Pascal, Deon Cain, Chester Rogers, and Parris Campbell.

Dulin, a Malone University product, gives the Colts five Division-II products on their roster. To make room for him, the Colts have waived cornerback Ryan Lewis.