AUG 19: The Seahawks look to have dodged a bullet here. Pete Carroll said Lewis X-rays revealed only a lateral ankle sprain, according to Bob Condotta of the Seattle Times. While Lewis could miss some time, he will have a chance to play this season. Haynes would start in Lewis’ absence, Carroll added.

AUG 18: Damien Lewis appeared to have suffered a serious injury on Thursday night. The Seahawks offensive guard was carted off the field during Seattle’s preseason contest against the Bears. 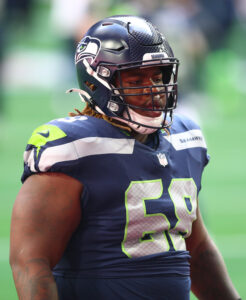 Lewis suffered a leg injury during a run play in the second quarter. Lewis was down on the ground for a bit while the trainers placed an air cast on his leg. The team, including head coach Pete Carroll, huddled around the offensive lineman before he was carted off the field. Predictably, Lewis was later ruled out for the game with an ankle injury.

Lewis has been a dependable member of Seattle’s offensive line since he joined the organization as a third-round pick in 2020. He’s started each of his 29 games since entering the league, and while he was graded 57th among 82 qualifying guards in 2021 (per PFF), he ranked 13th at the position as a rookie. Thanks to that performance in 2020, he earned PFWA All-Rookie Team honors.

Phil Haynes ended up replacing Lewis in the lineup, and there’s a chance the former fourth-round pick could end up securing the starting gig if Lewis is out. The team could also turn to backups like Greg Eiland and rookie Shamarious Gilmore.

Lewis wasn’t the only player hurt on the play. Bears linebacker Caleb Johnson was also down for a moment, but he was eventually able to walk off the field.

With Brandon Shell departing in free agency and Duane Brown and Ethan Pocic now rostered with the Jets and Browns, respectively, the Seahawks have had a bit of work this offseason piecing their offensive line back together. Seattle may even be in the extremely rare position of bookending their offensive line with two rookie tackles, according to Bob Condotta of the Seattle Times.

While Charles Cross has long been expected to start for the Seahawks on the blindside as the No. 9 overall pick in the draft, it appears that third-round pick Abraham Lucas is currently favored to man the tackle spot opposite Cross. The most recent instance of this in the NFL that I could find is back in 2012 when the Cardinals were forced to start seventh-round pick Nate Potter across from fourth-round pick Bobby Massie late in the season. That was a result of some injuries, though. The last time a team started the season with two rookie offensive tackles, I believe, was in 2009 when Jacksonville trotted out in Week 1 with first-round pick Eugene Monroe at left tackle and second-round pick Eben Britton at right tackle.

Additionally, while the Seahawks return Gabe Jackson and Damien Lewis as the starting guards from last year, backup guard Phil Haynes has reportedly been pushing both for playing time this offseason. According to a tweet from ESPN’s Brady Henderson, head coach Pete Carroll had plenty of good things to say about Haynes.

“Phil could start. He plays like a starter,” Carroll extolled. He looks like a starter out there and he’s pushing Gabe, he really is. He’s our guy that’s swinging right and left side right now. If he had to start for either guy right now, I would feel absolutely comfortable…I feel like we’ve got three starting guards right now that we could play and be fine with.”

Here are a few other rumors from around the NFC West, starting with a couple rumors from the Bay Area: