The 49ers have inked seventh-round pick Jauan Jennings, per a club announcement. Per the terms of his slot, the wide receiver is set to earn ~$3.4MM on his four-year deal. Of course, as the No. 217 overall pick, it’s not a certainty that he’ll make the roster. 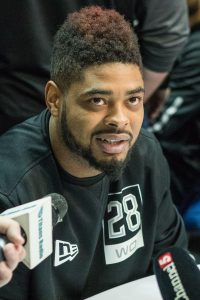 Jennings was the second wide receiver selected in April, long after first-round pick Brandon Aiyuk. Jennings didn’t come into the draft with the same sort of fanfare, but he was an accomplished player in his own right. In his final year at Tennessee, the 6’3″ receiver finished out with 59 receptions for 969 yards and eight touchdowns.

Jennings has shown that he can break tackles with his big frame, but his lack of speed impacted his stock somewhat. Still, you don’t need to beat every defender if you’re able to plow through some of them. Jennings will look to impress coaches with his power as he pushes to make a group that could be without Deebo Samuel for a little while.

Here’s the full rundown of the Niners’ class, via PFR’s tracker: