Since signing a deal that gave him the highest average salary of any running back in the NFL, Christian McCaffrey has missed 23 of 33 games. From a high ankle sprain to a shoulder injury to a hamstring injury and back around to his ankle again, McCaffrey has seen more than his fair share of the injured reserve. According to Joseph Person of The Athletic, McCaffrey reached out for some help this offseason.

Among a few others, one of the players McCaffrey sought help from was Hall of Fame running back Marshall Faulk, one of two players who share with McCaffrey the distinction of recording at least 1,000 rushing yards and 1,000 receiving yards in a single season, the other being Roger Craig. Faulk was especially healthy later in his career despite having a tendency for a higher amount of total touches as a receiving back, his late health being a trait that McCaffrey would love to emulate.

Person reports that Panthers head coach Matt Rhule indicated McCaffrey would again be held out of the preseason and that the team is also looking into how they use their star during practice. McCaffrey, himself, has been tweaking his own offseason routine, in hopes of reversing his string of bad luck.

Here are a few other injury updates from around the NFL, starting with two out of the Lone Star State:

The 49ers have opened up a significant chunk of cap space. According to ESPN’s Field Yates (on Twitter), the team has restructured the contracts of tight end George Kittle and defensive tackle Arik Armstead. These moves will open $18.75MM in cap space.

Kittle inked a sizable five-year, $75MM deal with the 49ers prior to the 2020 season, but he was limited to only eight games that year while dealing with a knee injury and a broken bone in his foot. He got into 14 games this past season and returned to his Pro Bowl form, hauling in 71 catches for 910 yards and six touchdowns.

Armstead has spent his entire career with San Francisco. The former first-round pick signed a five-year, $85MM deal ($48.5MM guaranteed) with the 49ers following a 2019 season where he finished with 10 sacks. Armstead has collected only 9.5 sacks over the past two seasons (33 starts), but he’s still collected 58 tackles and 24 QB hits. 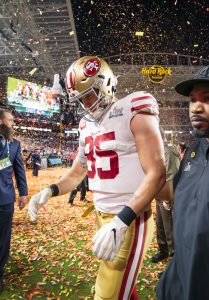 Kittle is battling a calf injury, and although he played through the ailment last week, he did not practice this week. The 49ers hope Kittle will be ready to go when he is first eligible to come off IR in Week 8.

This represents a blow for the 49ers’ offense and continues both a bad injury stretch for Kittle and the team. Kittle suffered a knee sprain and a fractured foot last season, which halted the star tight end’s progress after he had strung together back-to-back Pro Bowl slates. Although it is early, Kittle has run into extensive health trouble since signing his big-ticket extension last year.

In 2018, Kittle broke the tight end receiving yardage record by breaking through with a dominant 1,377-yard campaign. The former fifth-round pick did so despite Jimmy Garoppolo missing most of that season. With Garoppolo back in the fold in 2019, Kittle played an essential role in the 49ers’ run to Super Bowl LIV by totaling 1,053 yards and five touchdowns.

After signing Jordan Reed last year, the 49ers have less experienced backups to fill in for Kittle going forward. Ross Dwelley and 2020 sixth-round pick Charlie Woerner reside as the other tight ends on San Francisco’s roster.

Jimmy Garoppolo‘s calf injury will keep him out of the 49ers’ game against the Cardinals. Trey Lance will make his debut as an NFL starter, Kyle Shanahan confirmed Friday.

This was the likely course of action for the 49ers, but the team had kept the door open for Garoppolo to come back after missing just a half. Instead, Lance will take the reins in a key NFC West matchup. Whether this will be a long-term transition or an injury-replacement stay will hinge on how Lance fares, though the runway appears clear for the atypical quarterback prospect.

The 49ers traded up nine spots to land Lance at No. 3, sacrificing two future first-round picks to do so. The team was more closely linked to Mac Jones than Lance going into the draft, and a recent report indicated the 49ers’ Jones interest spurred the trade. But the team decided on Lance, a one-year starter from Division I-FCS North Dakota State.

Lance, 21, has looked expectedly raw as a passer but has assisted the 49ers as a backup, throwing a touchdown pass in Week 1 and impressing as a runner early on. It should be expected Shanahan’s game plan will feature Lance’s dual-threat skill set in Arizona, after the talented rookie took over for Garoppolo against Seattle last week. Lance completed 9 of 18 passes against the Seahawks and rushed for 41 yards during his first half of steady NFL action.

Lance is unlikely to have the benefit of targeting one of the NFL’s best tight ends in his first start. The 49ers have listed George Kittle as doubtful to go with a calf injury. Kittle suffered the calf malady against the Packers but suited up for Week 4. After not practicing this week, the Pro Bowler does not have a good chance of playing Sunday.

Raheem Mostert and Deebo Samuel will see their injury-marred seasons end early. The 49ers are shutting down both players with two games to go, Kyle Shanahan said (via the San Jose Mercury News’ Cam Inman).

Both ran into multiple injuries this year, causing the second-year starters to miss significant time in what became a widespread injury-plagued 49ers season. Each player is under contract beyond this season, with Samuel’s rookie deal running through 2022 and Mostert’s pact expiring after next season.

The 49ers, however, are not opting to shut down all their injured skill-position talents. George Kittle has returned to practice, and Inman notes the All-Pro tight end is on pace to return against the Cardinals. Kittle, who has not played since suffering a foot fracture Nov. 1, would catch passes from his former college quarterback if he does return. The 49ers will start Iowa alum C.J. Beathard over Nick Mullens on Saturday.

A 2017 third-round pick, Beathard has worked as San Francisco’s third-string quarterback for much of his NFL tenure. His contract expires at season’s end. Mullens suffered what is believed to be ligament damage in his elbow against the Cowboys, Inman notes, and will likely need Tommy John surgery. He is due to be a restricted free agent in March.

Kittle will only play if he’s 100%, per Shanahan, who noted the 49ers will not shut down their star tight end if he is fully healthy — despite having been eliminated from playoff contention last week.

Mostert left Sunday’s game because of ankle trouble. The special-teamer-turned-RB1 sustained an MCL sprain in September and injured his ankle upon returning in October. Mostert, 28, was not able to surmount the latter malady. Mostert did end a second straight season averaging at least 5.0 yards per carry, however, though he only managed 104 totes this season. Samuel sustained a foot fracture before training camp but was able to return fairly early in the season. However, a hamstring injury hampered Samuel shortly after he returned. The 2019 second-round pick caught 33 passes for 391 yards over seven games this season.

Jimmy Garoppolo will resume practicing this week, but Shanahan said (via Inman) he would be surprised if doctors deem San Francisco’s QB1 100%. It is likely Beathard will handle the 49ers’ final two starts at quarterback. A high ankle sprain sidelined Garoppolo at multiple junctures this season. He played in just six games. Shanahan said last month the plan is for Garoppolo to return as the team’s starter in 2021, though the franchise will surely explore other options this offseason. Two years remain on Garoppolo’s contract, one the 49ers can move without incurring much dead money.

We might not see Jimmy Garoppolo or George Kittle back on the field this year. After last night’s loss to the Bills, Kyle Shanahan indicated that both players have a long way to go as they work to bounce back from injury.

“Those guys are working their tails off right now,” Shanahan said (via Chris Biderman of The Sacramento Bee). “But they’re still part of the rehab, just trying to get back and be a part of this, but it’s not anytime soon right now.”

GM John Lynch was a little more optimistic, saying he’s “hopeful” that Garoppolo and Kittle will be back by season’s end (Twitter link via Matt Maiocco of NBC Sports Bay Area).

The Niners are still technically in the playoff mix, but their odds have dwindled significantly. At 5-7, the reigning NFC champs will need wins against the Washington Football Team, Cowboys, Cardinals, and Seahawks. The double dose of NFC East opponents should help, but if San Francisco should fall completely out of contention, it wouldn’t make sense for the club to rush key players back from injury.

Injuries have ravaged the Niners on both sides of the ball this year. On the plus side, they have returned star cornerback Richard Sherman, though he’s not so sure about his future beyond 2020.