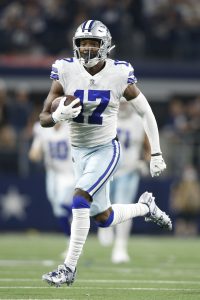 Turner also agreed to a one-year deal. The former UDFA will join his third team, coming to San Francisco after two-year stays in Seattle and Dallas.

A University of Illinois product, Turner has worked as a backup and special-teamer for most of his career. The 6-foot-2 pass catcher has 29 career receptions for 414 yards and four touchdowns. Three of those TDs came last season, though each occurred in lopsided contests — two in a loss to the Broncos and one in the Cowboys’ 56-point outing against Washington. Turner, 26, also participated on 59% of the Cowboys’ special teams plays.

On Wednesday, the 49ers met with free agent wide receivers Marcus Johnson and Malik Turner (Twitter link via Aaron Wilson of Pro Football Network). There’s no deal just yet, but both players could be considered for spots on SF’s 90-man offseason roster.

Turner, fresh off of a recent meeting with the rival Cardinals, first entered the league in 2018 as an undrafted free agent with the Seahawks. He saw time in 21 games for Seattle between 2018 and 2019, followed by 20 games with the Cowboys (2020 and 2021). He’s spent the bulk of his time on special teams, though he’s notched 29 receptions for 414 yards and four touchdowns over the course of his career.

It’s a similar story for Johnson, who has 51 catches, 839 receiving yards, and three touchdowns to his credit across five seasons with the Eagles, Colts, and Titans. Although his sample size is limited, Johnson has shown that he can be a real deep threat. He’s averaged 16.5 yards per catch as a pro, including 2020 when he posted 18.2 ypc for the Colts.

In other team news, longtime 49ers legend Frank Gore finally decided to call it a career on Sunday. Gore, 39 in May, leaves the game with exactly 16,000 regular season yards and a career 4.3 yards per carry average.

The Cardinals receivers corps is questionable at best, so the team is looking to add some reinforcement. According to ESPN’s Field Yates (on Twitter), the Cardinals hosted wideout Malik Turner today.

The former undrafted free agent spent the past two seasons in Dallas, seeing time in 20 games. All of his offensive production came in 14 games this past year, when he collected 149 receiving yards and three touchdowns on 12 touches. Turner also had a consistent role on special teams.

The receiver spent the first two seasons of his career in Seattle, collecting 265 yards and one touchdown. He also got into one playoff game for the Seahawks, dropping a critical pass in a loss to the Packers. In an ironic twist, Turner had a brief stint with the Packers organization the following season.

DeAndre Hopkins remains atop the depth chart, but he was limited to only 10 games and 572 receiving yards last season. With Christian Kirk out of the picture, the team will need one of their other receivers to step up. The team is rostering the likes of Rondale Moore, Greg Dortch, Antoine Wesley, and Andy Isabella.

The Cowboys have added another pass-catcher, as Dallas claimed former Seahawks and Packers receiver Malik Turner off waivers Sunday morning.

A 2018 UDFA from Illinois, Turner spent most of his rookie season on Seattle’s practice squad. He played a decent-sized role on offense for them last year though, appearing in 15 games and making three starts. Overall he played around 22 percent of the offensive snaps while also playing a big role on special teams. He finished the year with 15 receptions for 245 yards and a touchdown, averaging a robust 16.3 yards per catch.

Seattle originally tendered him as an exclusive rights free agent, then pulled that tender. He waited until August to sign with the Packers, then was cut yesterday. The Cowboys have a great receiving trio of Amari Cooper, Michael Gallup, and CeeDee Lamb, but they don’t have much after that so it makes sense to pick up someone like Turner and see if he can develop behind them.

The Seahawks have pulled their exclusive rights tender for Malik Turner, according to Field Yates of ESPN.com (on Twitter). With that, Turner has gone from the ERFA property of the Seahawks to a full-fledged free agent.

It’s rare for an ERFA to have his tender pulled, especially since those deals are inexpensive with no real guarantees, but the Seahawks apparently had second thoughts. Turner, 24, appeared in 15 games for Seattle last year. He managed 15 receptions for 245 yards and a touchdown in his second season with the club.

Meanwhile, the Seahawks re-upped a pair of their own free agents this week. Guard Mike Iupati, entering his age-33 season, will return on a one-year deal. Ditto for cornerback Neiko Thorpe, who is also looking to stay healthy after finishing the 2019 season on IR.