The Giants have been without safety Xavier McKinney for the last three games due to a broken hand that he suffered in an ATV accident during a bye-week vacation. As Jordan Raanan of ESPN.com reports, McKinney is expected to miss at least several more weeks, but he does plan to return this season. 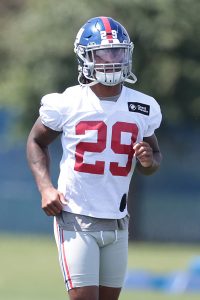 New York is 7-4 and currently holds the sixth playoff spot in the NFC. However, the club has lost two in a row and takes on the division-rival Commanders — who presently hold the seventh and final postseason spot — two times within the next three weeks. As such, Big Blue’s postseason fortunes could be largely decided before McKinney gets back on the field.

McKinney, 23, was selected in the second round of the 2020 draft, and while a broken foot limited him to just six games in his rookie season, he emerged as a foundational player for the Giants in 2021, when he appeared in all 17 games (16 starts) and notched five interceptions. He also pulled down an excellent 75.4 grade from Pro Football Focus, which was especially bullish on his coverage abilities.

His PFF grade slipped to 56.3 over the first eight games of the current season, though his presence is still missed. A team captain, McKinney is also the defensive signal-caller for a unit that was ranked eighth in the league in scoring defense at the time of his injury and which is now ranked 14th in that regard.

The secondary as a whole has been hit hard by injury. In the Giants’ Thanksgiving Day loss to the Cowboys, they were without starters Adoree’ Jackson, Fabian Moreau, and McKinney, and while Moreau is active for the team today, Jackson is expected to miss several more weeks. As Dan Duggan of The Athletic tweets, New York is deploying Nick McCloud and Moreau on the boundaries today, while UDFA rookie Zyon Gilbert — who is making his pro debut — will work as the primary slot corner.

In McKinney’s stead, the Giants first turned to fourth-round rookie Dane Belton for two games before pivoting to Jason Pinnock, a 2021 fifth-round choice of the Jets whom Big Blue claimed off waivers during final cutdowns in August.

Here today’s minor moves from around the league:

Fabian Moreau was in line to be a complimentary member of the Texans’ CB room this season, but that will not happen. The team announced on Wednesday that they have released the veteran. 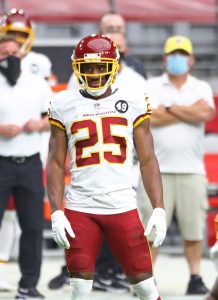 Moreau signed with Houston at the end of May, his second consecutive one-year free agent deal. The former third-rounder had registered 18 starts in his four seasons in Washington, racking up six interceptions and 14 pass breakups. That led him to the Falcons last offseason.

Starting opposite A.J. Terrell, the 28-year-old logged more than 1,000 snaps for the first time in his career, setting a new personal mark with 11 PBUs as well. However, he struggled in coverage, allowing an opposing passer rating of 115 and surrendering eight touchdowns. That hindered his free agent market, leading to just a $2MM contract with the Texans.

Houston had also signed Steven Nelson as a starting-caliber veteran to pair with No. 3 pick Derek Stingley Jr. This moves cements their status at the top of the depth chart; the Texans will also lean on Desmond King in the slot, along with Tavierre Thomas as an experienced rotational player.

Stingley comes with injury concerns dating back to his last two years in college, of course, but he has the upside to help accelerate the Texans’ rebuild if sufficiently insulated by the team’s remaining veterans. With final roster cuts just days away, meanwhile, Moreau will now look to find a new NFL home.

Here are the details on several recently-signed contracts:

Although Derek Stingley Jr. will be the biggest name the Texans deploy at cornerback next season, the rebuilding team will rely on a few experienced veterans at the position. Another agreed to join the the Texans on Tuesday.

Former Washington and Atlanta corner Fabian Moreau agreed to terms with Houston, Mike Garafolo of NFL.com tweets. He will join Steven Nelson as veteran corners to have committed to the Texans this offseason.

A Washington third-round draftee in 2017, Moreau played out his rookie contract in D.C. and caught on with the Falcons in March of last year. He fetched just a one-year deal worth $1.2MM with Atlanta. Moreau started 16 games with the Falcons, playing opposite blossoming talent A.J. Terrell. The Texans figure to try him opposite Stingley, this year’s No. 3 overall pick, though Nelson stands to have considerable say in whom the team uses as its No. 2 corner.

Moreau, 28, gives the Texans some options; he has played outside and in the slot as a pro. He did not tally any interceptions last season but finished with a career-best 11 passes defensed. Moreau’s yards-per-target figure went down from 2020 to ’21, but the UCLA product’s completion percentage allowed and passer rating while the closest defender marks skyrocketed. The 6-foot defender also allowed eight touchdown receptions as the closest player in coverage, by far a career-high total.

As a result, a tepid market awaited the five-year contributor. Still, Moreau provided durability (career-high 1,037 defensive snaps) with the Falcons — after seeing his defensive snap rate plummet to 15% in Jack Del Rio‘s first DC season in Washington — and had some nice coverage stretches in the years prior.

The Texans continue to stockpile midlevel veterans under Nick Caserio, whose first offseason featured a host of deals with this sort of player. Houston added Nelson in mid-April. Despite the ex-Chiefs and Steelers starter coming off a down season with the Eagles, Nelson also worked as a full-timer last season (982 defensive snaps). The Texans have created a bit of depth at a position in which they also have returning slot defender Desmond King, whom they re-signed this offseason. The team also returns regular Tavierre Thomas, a fifth-year veteran who signed a two-year, $4MM contract in 2021.

A former third-round Washington draftee, Moreau played in the slot and outside at points with his original team. The Falcons, who added longtime Washington exec Kyle Smith to their front office this year, will bring in Moreau to help their secondary.

Moreau will join a secondary that fared poorly in Dan Quinn and Raheem Morris‘ final seasons with the Falcons. The Falcons ranked last in pass defense in 2020. They have a young group of corners, headed by 2020 first-round pick A.J. Terrell, due back but certainly will need some outside help going into Dean Pees‘ first season as DC.

After Moreau enjoyed a steady gig for the 2018 and ’19 Washington squads, Ron Rivera reduced his role last season. The UCLA product played just 15% of Washington’s defensive snaps in 2020. Washington was still believed to be interested in re-signing Moreau, per ESPN.com’s John Keim (on Twitter). Instead, Moreau will head to Atlanta looking to bounce back. He should be expected to see more frequent playing time than he did last season.