With Lamar Jackson, Joe Burrow, and Deshaun Watson (tentatively) being cemented behind center in Baltimore, Cincinnati, and Cleveland, respectively, Pittsburgh is working to name their starting quarterback to open the 2022 NFL season. According to Gerry Dulac of the Pittsburgh Post-Gazette, the current situation points towards free agent acquisition Mitchell Trubisky being named the starter for the Steelers’ season opener in Cincinnati.

On 105.7 The Fan, Dulac was quoted saying, “I think the plan is, and I don’t think there is any question about this, unless something would dictate otherwise including injury, I think Mitch Trubisky will go into the regular season as the starter.” He continued, “NFL teams don’t draft quarterbacks No. 1 to have them be the third quarterback and a gameday scratch. I expect Kenny Pickett to be the guy who dresses on gameday (as the primary backup).”

When asked where that leaves five-year veteran Mason Rudolph, Dulac thinks the Steelers will have “a little bit more respect than to keep him around as the third quarterback and a gameday scratch.” Dulac believes Pittsburgh would rather have the two parties mutually move on and try to find him a trade to a desirable location.

Here are a few other rumors from around the AFC North, starting with a couple rumors from the division (and conference) champions from last year:

A little over a week ago, the Browns reached an agreement to re-sign running back D’Ernest Johnson to a one-year deal. Pro Football Focus’ Doug Kyed reported some details on the contract. 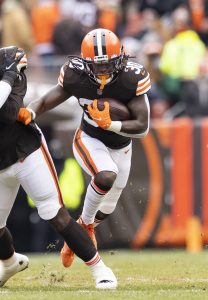 The Browns showed their interest in retaining running back D’Ernest Johnson when they gave him an RFA tender. Today, they have come to terms with him on a one-year deal (Twitter link via ESPN’s Adam Schefter).

The contract is worth up to $2.433MM – the exact amount of this year’s right of first refusal tender. However, as detailed by Nate Ulrich of the Akron Beacon Journal (on Twitter), this is a new deal, rather than a matter of Johnson simply signing the tender. The pact includes $900K in guaranteed money.

The 26-year-old has been with the Browns since 2019. He saw a significant amount of playing time on special teams, including opportunities as both a punt and kick returner. That continued the following year, but he did see a slight uptick in offensive snaps as well. It was in 2021 that he took a significant step forward in terms of production.

Appearing in all 17 games (including two starts), the former UDFA turned 100 carries into 534 rushing yards and three touchdowns; he added another 137 off of 19 receptions. For the third straight season, he averaged no fewer than five yards per carry, though that figure holds much more weight in the context of his 2021 workload. Given that efficiency, it came as little surprise that the Browns tendered him.

Still, the fact that Johnson sits third on the team’s RB depth chart (behind Nick Chubb and Kareem Hunt) makes this move a relatively expensive one. Cleveland currently has Chubb on one of the most lucrative deals in the league at the position, along with Hunt under contract for one more season at a cap hit of $6.25MM. The latter is still part of the team’s long-term plans, despite the presence of Johnson, Demetric Felton and fifth round rookie Jerome Ford. For the upcoming campaign, Johnson will remain a proven depth option available for at least a rotational role.