Lions wide receiver Quintez Cephus suffered a broken collarbone on Sunday (Twitter link via NFL.com’s Tom Pelissero). That’ll likely end his season here in October, though there’s a small chance that he could return later on this year. Either way, the Lions will have to place him on the injured reserve list. 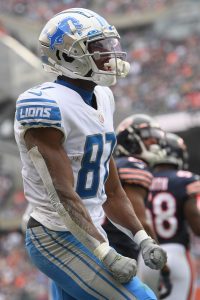 Cephus was a bright spot for the Lions in an otherwise challenging year. Through five games, the young WR had 15 catches for 204 yards and two touchdowns, nearly matching his entire rookie slate.

The Lions snagged Cephus in the fifth-round of the 2020 draft, due to assault allegations that tanked his stock. On the field, he showed serious potential by catching 59 passes for 901 yards and seven touchdowns in his final year at Wisconsin.

The Lions, who are short-handed on both sides of the ball, are 0-5 following Sunday’s loss to the Vikings. They’ll try to get into the win column on Sunday when they face the Bengals in Detroit.

The Lions have agreed to terms with fifth-round wide receiver Quintez Cephus, according to his agents at SportsTrust Advisors (Twitter link).

Cephus, who caught 59 passes for 901 yards and seven touchdowns during his final year at Wisconsin, will likely need to contribute on special teams during his rookie campaign. Detroit boasts a wide receiver depth chart that’s already at least four-deep with Kenny Golladay, Marvin Jones, Danny Amendola, and Geronimo Allison, while ace returner Jamal Agnew is making the change to full-time pass-catcher.

Cephus was expelled from Wisconsin during an ongoing investigation into assault charges filed by two women in the spring of 2018. He not only denied the accusations, but sued the university, arguing he was expelled with no due process. Cephus was ultimately acquitted and dropped the lawsuit against Wisconsin, and the school reinstated him as both a student and an athlete for 2019.

With Cephus under contract, the Lions now have six of their nine 2020 draft picks signed. Here’s the full list: