Weeks after seeing Anthony Walker go down with a season-ending injury, the Browns believe one of their other linebackers will not return this year. Kevin Stefanski said Jacob Phillips is unlikely to come back in 2022 due to a pectoral injury, Mary Kay Cabot of cleveland.com notes.

The Browns had turned to Phillips, a third-round pick in 2020, as a full-time player in the wake of Walker’s injury. Phillips played every Browns defensive snap from Weeks 4-6, but this marks another major injury for the former LSU Tiger. He missed much of last season because of a biceps tear. 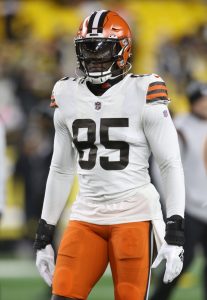 Cleveland will turn to another LSU alum now. The team’s recent trade for Deion Jones was designed at giving the former Falcon a key role once he sufficiently acclimated himself in Joe Woods‘ defense. After spending the first six weeks of the season on IR and playing 52% of Cleveland’s defensive snaps in Week 7, Jones will be needed as a full-timer alongside Jeremiah Owusu-Koramoah. Jones, 28 next week, fell out of favor in Atlanta but has 83 career starts on his resume. The Browns’ Monday-night game against the Bengals will likely be No. 84.

Phillips, 23, who debuted at LSU in 2017, did not overlap at the SEC school with Jones — a 2016 second-round pick. Phillips started Sunday’s game in Baltimore and made seven solo tackles, giving him 46 for the season. He added two sacks — against the Steelers and Chargers — during his run replacing Walker as well. Phillips’ rookie contract runs through 2023.

Additionally, the Browns are set to be without David Njoku for a stretch. The sixth-year tight end sustained a high ankle sprain, Cabot adds. The recently extended pass catcher is set for a two- to five-week recovery timetable. Njoku, 26, left M&T Bank Stadium on crutches Sunday. This will interrupt the former first-rounder’s career-best pace. Njoku, who caught seven passes for 71 yards against the Ravens, had totaled 418 yards this season. His career-high (639) came back in 2018.

The Browns extended Njoku on a five-year, $54.75MM deal weeks after franchise-tagging him. While the 2017 draftee had not offered much consistency in Cleveland, the team is banking on him making a mid-career leap during Deshaun Watson‘s run at quarterback. Njoku was rewarding the team’s faith thus far; his 34 receptions tie Amari Cooper for most on the team. By the time Njoku returns, Watson may be at the helm.

5:45pm: The Browns made the roster move official this afternoon, according to Aaron Wilson of Pro Football Network, placing Walker on injured reserve, where he is expected to remain for the rest of the season.

11:52am: Anthony Walker left Thursday night’s game early, and the Browns linebacker will not return this season. An MRI revealed the sixth-year defender suffered a quadriceps tendon tear, Adam Schefter of ESPN.com reports (on Twitter). 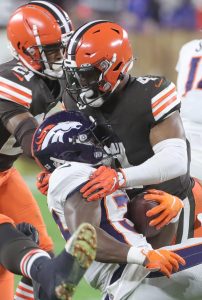 After initially signing Walker in 2021, the Browns gave him a one-year, $4.25MM deal to come back as a starter. But the team will need to make a long-term adjustment after Friday’s news. This is a tough blow for Walker, who required cart transportation last night and will be set to go through a five- to seven-month rehab timetable.

A 2017 Colts fifth-round pick, Walker has been a starter for the past five seasons. The Colts let him walk in 2021 and doled out record-setting off-ball linebacker money to Shaquille Leonard months later. But Walker made an impact in Cleveland last season. Pro Football Focus rated him as a top-20 off-ball linebacker alongside promising youngster Jeremiah Owusu-Koramoah. Walker, 27, made 113 tackles and notched a sack last season.

While Phillips has only started four games in his Browns career, he played well against the Steelers. The LSU product registered seven tackles and came through with a third-down sack and a third-down pass breakup during Cleveland’s Week 3 win. This figures to turn into an audition season for Phillips, who played just 123 defensive snaps last year.

Browns linebacker Jacob Phillips is likely done for the year with a biceps tear (Twitter link via Adam Schefter of ESPN.com). Philips will know more about his outlook following surgery to repair the tendon. 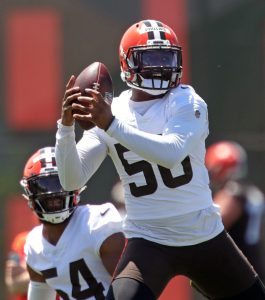 Phillips, a 2020 3rd-round pick of the Browns, was expected to be a core contributor on defense. He was in the midst of a solid camp and trending in the right direction after missing a good chunk of his rookie year with a knee sprain. The Browns planned on using him as Anthony Walker‘s primary backup at middle linebacker with some possible action on the weakside.

Without Phillips, the Browns will be counting on 2021 second-rounder Jeremiah Owusu-Koramoah to pick things up quickly. They’ll also be keeping their fingers crossed for fellow ‘backer Sione Takitaki as he recovers from a (less severe) hamstring injury.