Lions guard T.J. Lang has been placed on injured reserve due to a neck injury, according to a team announcement. The move will end Lang’s season and may mark the end of his time in Detroit. 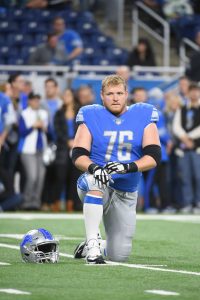 Lang, 31, left the Packers in 2017 to sign with their divisional rival. At the time, the Packers were widely slammed for allowing Lang to get away, but they may have made the smart move in hindsight. Thanks to injuries, Lang missed three games last season and appeared in just six games this year.

This offseason, the Lions can release Lang to save $9MM against the cap. The move would leave them with just $2.6MM in dead money and it’s something of a no-brainer, despite the two-time Pro Bowler’s past accomplishments.

In a related move, the Lions promoted cornerback Mike Ford off the practice squad. Even after swapping Lang for Ford, the Lions have one more vacant spot to fill on their 53-man roster.